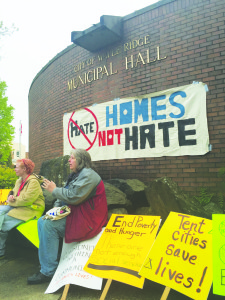 The Maple Ridge street population is keeping the fight alive. In September their camp on Cliff Avenue was broken up and they were packed into a shelter or scattered into bushes around the city. Today BC Housing is announcing plans to extend that shelter longer… posing life in a former mattress store as the only ongoing alternative to sleeping outside to be harassed by Ridgeilantes and moved along by bylaw cops. But the street population is fighting back, and organizing a campaign: Homes Not Hate Maple Ridge. This week they launched a petition and have been distributing a leaflet. The text of this leaflet and the demands of the petition are below.

Homes Not Hate Maple Ridge is a community campaign led by the street population and low-income residents of Maple Ridge and supported by Alliance Against Displacement. While we believe low-income, Indigenous, and working- class people must lead this movement, we welcome the support of all Maple Ridge residents as we rally in support of these four main principles, advocate for these changes in government policy and ideas in the community, and take control over our own lives.

Throughout the summer we plan some actions and events to build this campaign. Some of our first actions will be low- income community BBQs and social gatherings, a public townhall about poverty in Maple Ridge, meetings with government representatives, and protests and direct actions when we need them.

To support this campaign, sign-on and endorse our four main demands:

1. Homelessness is not a crime

Bylaw officers need to treat the street population and low- income people as people, obeying the same protocols they do with housed and more wealthy people. Confiscating our belongings is theft, breaking into our tents is breaking- and-entering. We refuse to be moved-on and stolen from.

2. Remove the barriers to survival services

There are few services for the street population in Maple Ridge, and those that exist have too many barriers. If you don’t have an address, you can’t use the Foodbank. We don’t have homes or a supervised injection site but Ridgeilantes complain that we use drugs in public. The little social housing that does exist has a lot of rules that are unfair, restrict pets, and treat us like children. Clinics & hospitals mistreat people they profile as homeless. We need basic health, food, and shelter services without barriers.

3. Tent cities are a safe zone

When we sleep out alone, we are isolated and in danger. Bylaw officers slash our tents and steal our things. Ridgeilantes yell at us, throw things, and even try to run us over with their cars. These are both examples of anti-homeless  hate that we must defend ourselves against. Shelters are not a solution to this problem for all of us because there is not enough space and there is less privacy and more unfair rules than in tent cities or in the homes we need. As long as homelessness and poverty exist, homeless people will organize together in tent cities for safety and community. We need the city to give us a piece of land where we can stop overdose deaths, leave our stuff, and organize our community without threats and harassement.

Ridgeilantes and the government say they want us off the streets but they don’t seem to want us housed. The Province is promising to build some new social housing in Maple Ridge, but it will only be
a fraction of the apartments we need, and it will take five years to build. What are we supposed to do until then? We need that new housing, and more. And we need the government to buy Quality Inn to house us now, until more housing can be built. We need permanent low-income affordable social housing that
is run like ordinary apartments so each resident can get the resources, and supports they need, not imposed on us because we’re poor.

AAD occupation of BC Housing office