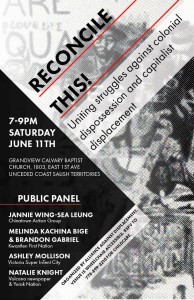 The theft and commodification of resources through settler-colonial occupation underlays every aspect of Canada’s wealth. Under 21st Century austerity governing policies that cut taxes for the rich to cut social programs for the poor, that wealth is increasingly concentrated in the hands of fewer and fewer super rich, while more and more low-income working class and Indigenous people are pushed into the streets. But is the solution to this problem simply to redistribute that stolen wealth downwards? Can we imagine struggles against displacement and poverty also lining up behind Indigenous-led struggles against colonial dispossession?

On the weekend of June 11 and 12, delegates from communities throughout the Fraser Valley and southern Vancouver Island will gather in Vancouver to learn from each other and build a stronger fightback against poverty, homelessness, and the displacement crisis. On Saturday evening this “Together Against Displacement and Dispossession” organizing summit will include a public event: a panel to investigate a tension within the struggles for the redistribution of wealth stolen through the occupation of native lands.

Accessibility information: The church’s kitchen entrance is at street level, which gives access to washrooms, kitchen, and lower hall. One washroom has a stall that can accommodate a wheelchair. The washroom door opening is 86cm and the stall door is 61cm. Washrooms are de-gendered for community events. The panel is in English.

The panel will be taking place on the unceded coast salish territories of the xʷməθkʷəy̓əm (Musqueam), Səl̓ílwətaʔ/Selilwitulh (Tsleil-Wauthuth) and Skwxwú7mesh Úxwumixw (Squamish) peoples.