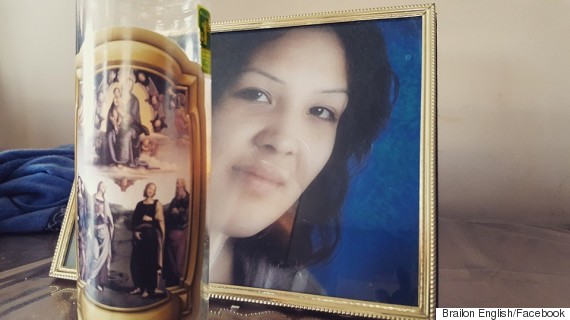 Joey English was full of love, and laughter. Her dreams, her aspirations and her desire to seek treatment for her addictions and mental illness were thrown away, says her cousin Brailon. June 8th 2016, the dismembered remains of Joey were discovered in a park in Calgary. A Blood Tribe woman, whose life came to a horrific end at the age of 25, a mother, a daughter, she lost her sister to suicide. Her mother did a call out for support, so we organized a vigil for the same day and time Stephanie would gather people in Calgary.

On July 15th, we gathered on unceded lands known as the Downtown Eastside of Vancouver. We prayed that the world will join us to stop the violence against Indigenous women. It is our sacred duty to honor the call to stand up for the life that Joey had stolen from her. Our men stepped up, from We are Revolution, wearing red shirts and walked with us to reclaim their roles as protectors. Omarla, Joey’s auntie called on us to share Joey’s story.

The family is looking for a lawyer, for the rest of her body to be returned so they can bury her, and for Joey’s story to never be forgotten. May we all create healing and justice, not just for Joey and her family, but for all Indigenous women, for if Joey was not Indigenous this wouldn’t have happened. They come for our lands like they come for our women.