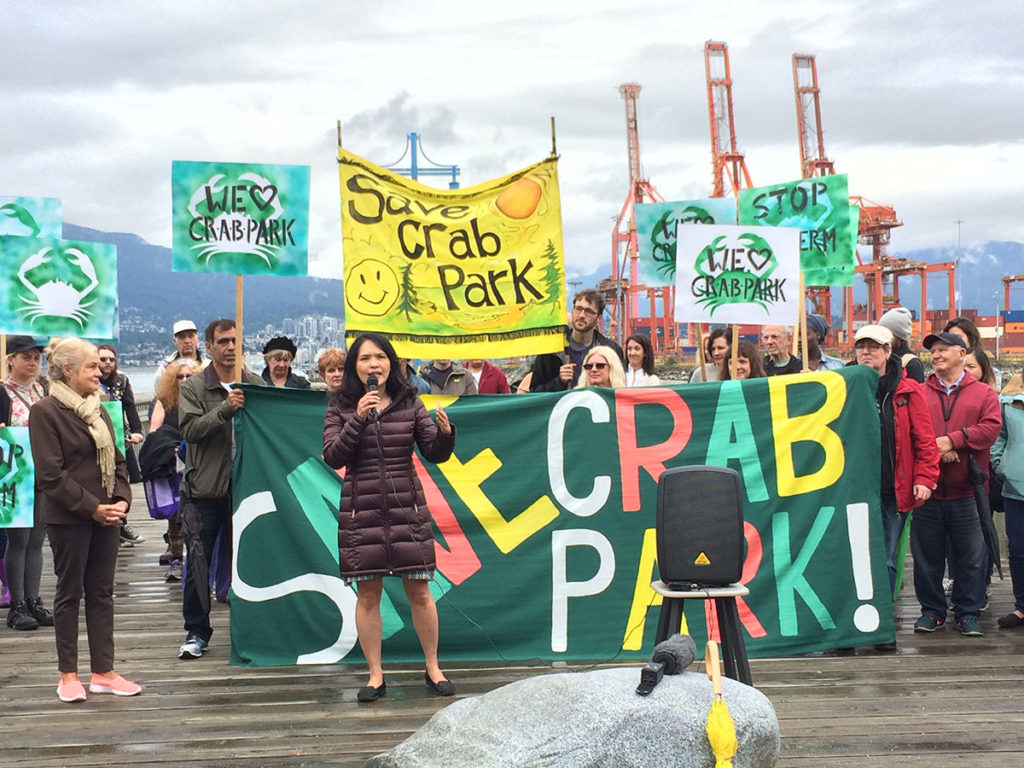 A huge multinational company owned by the Government of Dubai is threatening CRAB Park.

Dubai Ports World, operators of the Centerm container terminal beside much-loved CRAB Park at the foot of Main Street, plans to increase its container capacity by 67%. As part of this expansion, Centerm plans to extend its terminal seven acres westward by dumping dirt and rock into the ocean right in front of the Park.

The name CRAB stands for the activist legacy of the park: Create a Real Accessible Beach. Downtown Eastsiders and their allies have struggled successfully for 33 years for CRAB Park: to create it, to ensure disabled access, to stop a casino funded by big Vegas money, and most recently to prevent a massive soccer stadium/entertainment venue from being planted beside the park.

Now Centerm’s expansion threatens to transform CRAB’s natural setting into a heavy industry zone with its attendant air, water and noise pollution. It will bring in more hazardous cargo to a heavily populated neighbourhood that already endured a huge chemical fire from Centerm’s terminal in March 2015. That fire necessitated an evacuation of the waterfront and had children walking home from school in a cloud of toxic smoke.

CRAB Water for Life Society, led by CRAB champion Don Larson, the Four Sisters Housing Cooperative and various individuals, have banded together to Save CRAB Park and stop Centerm’s expansion in front of it. They attended the Port’s AGM, met with their CEO, held a rally, and now sponsor two petitions: one an official paper petition to Parliament that was presented in the House of Commons by Vancouver East MP Jenny Kwan, and a LeadNow online petition to the Port of Vancouver.

The Port of Vancouver is not accountable to any level of government and it alone has the power to stop this expansion. The Port claims that it wants social license for its project. Save CRAB Park has more than 7,500 petition signatures—so far—that deny the Port that license.