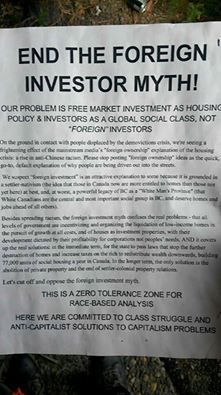 On Tuesday August 2nd the government of British Columbia placed a new tax on “foreign” investment in housing. The mainstream media has been busy with stories about the 15% tariff being ineffective to curb big development, redirecting Vancouver’s “problem” to Toronto, and victimizing “innocent” home-buyer professionals who are in Canada on work visas. How do we cut through the muck to understand the meanings of this tax, what it is meant to resolve, and what social dangers it poses?

Well, August has begun and The Volcano is on a partial hiatus. We will be mostly publishing articles we already have in-hand, and our analysis pieces will be fewer until September. So in the interim, here are a couple articles that lay some fundamentals about foreign investment, and how the national-racial discourse surrounding it has changed what is meant in the media by “housing crisis,” and increased a populist anti-Asian racism in working-class and low-income communities.

1) Maria Wallstam and Nate Crompton, “Beyond the foreign investment debate”

3) Alliance Against Displacement, “End the Foreign Investor Myth” (and see below)

4) Maria Wallstam, “Are ‘foreigners’ to blame for the housing crisis?” (Video of Maria speaking at a rally for the Anti-Imperial Squat, July 2016)

OUR PROBLEM IS FREE MARKET INVESTMENT AS HOUSING POLICY & INVESTORS AS A GLOBAL SOCIAL CLASS, NOT “FOREIGN” INVESTORS

We suspect “foreign investment” is an attractive explanation to some because it is grounded in a settler-nativism (the idea that those in Canada now are more entitled to homes than those not yet here) at best, and, at worst, a powerful legacy of BC as a “White Man’s Province” (that White Canadians are the central and most important social group in BC, and deserve homes and jobs ahead of all others).

Besides spreading racism, the foreign investment myth confuses the real problems – that all levels of government are incentivizing and organizing the liquidation of low-income homes in the pursuit of growth at all costs, and of houses as investment properties, with their development dictated by their profitability for corporations not peoples’ needs. And it covers up the real solutions: in the immediate term, for the state to pass laws that stop the further destruction of homes and increase taxes on the rich to redistribute wealth downwards, building 77,000 units of social housing a year in Canada. In the longer term, the only solution is the abolition of private property and the end of settler-colonial property relations.

Let’s cut off and oppose the foreign investment myth.

THIS IS A ZERO-TOLERANCE ZONE FOR RACE-BASED ANALYSIS