Ridgeilantes don’t want low-income people on the streets, in shelters, or in housing: By Maria Wallstam 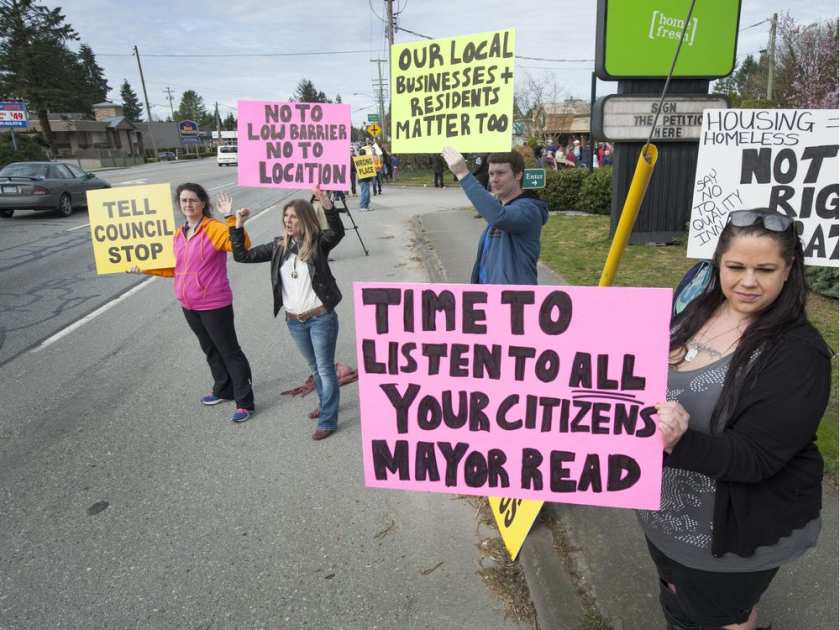 In August, the City of Maple Ridge bought a property at 21375 Lougheed Highway in partnership with B.C. Housing, which has agreed to pay for the construction and operation of a homeless shelter on the site. Maple Ridge property and business owners, who the local street population have dubbed “Ridgeilantes,” swiftly responded by starting a petition against the shelter and organizing their fourth anti-homeless demonstration in a year.

The anti-homeless Ridgeilantes argue that homeless people are “junkie criminals” that are a threat to “ordinary” Maple Ridge “taxpayers.” One petition signer writes,” I’m signing because putting a shelter in our backyards is absolutely ridiculous. We already have to deal with the runoff from the current shelter, the druggies and the thieves who think our backyards are for their gain.” Another signer writes, “I do not want nor do I support any form of low barrier shelter anywhere in Maple Ridge.”

The solution to homelessness, they argue, is more policing, forced treatment and or forced institutionalization at places like Riverview, outside of Maple Ridge. These self-proclaimed “taxpayers” of Maple Ridge want homeless people to be driven out of Maple Ridge, no matter the means.

The Maple Ridge anti-homeless mob doesn’t want homeless people in Maple Ridge but they don’t want housing for them either. Earlier this year, when the BC government along with the City of Maple Ridge, announced plans to buy the Quality Inn hotel on Lougheed Highway, residents also responded by organizing against the social housing plans for the site. The anti-homeless mob gained the bi-partisan support of the governing BC Liberals and the official opposition. Rather than defend homeless peoples’ right to housing, BC NDP Housing Critic David Eby claimed at a public housing town hall and on social media that Ridgeilante demands were reasonable. And the BC Liberal government seized the opportunity and cancelled the sixty beds that would have otherwise opened at Quality Inn.

The anti-homeless discourse in Maple Ridge has also contributed to dehumanizing homeless people and building a social climate where violence against homeless people is accepted and encouraged. Receiving threats of violence or even death, being followed by cars, having bottles thrown at you, having your belongings taken or destroyed, is part of the everyday experience of being homeless in Maple Ridge. Because of lack of supports, housing, stigma and discrimination, homeless people continue to have half the life expectancy of other BC residents and the Fraser Valley has seen the most rapid increase of premature homeless deaths in BC.

But homeless peoples’ resistance to poor bashing and anti-poor bigotry has not been for nothing. As Ridgeilantes mobilize to block the shelter Maple Ridge so desperately needs, they are being met by two efforts to support the street population. Former residents of the Cliff Avenue Tent City have launched a “Homes Not Hate” campaign. And directly in response to the anti-shelter petition, another group of Maple Ridge residents have launched their own petition, in support of the shelter on Lougheed Highway. You can read more and sign this petition here.

August 31st Overdose Awareness Day – A Day of Reflection, a Push for Action