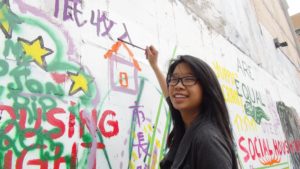 Tell us a little about yourself

I’m Beverly Ho and I’ve been volunteering in Chinatown for a little over a year. I’m 22 and I grew up in Vancouver. Originally I started volunteering because I went to a Mandarin meet-up group where everyone goes to practice Mandarin. King-mong Chan was there, and Chanel Ly. I didn’t know any of them until that day. Chanel had just started the Youth for Chinese Seniors project. I recognized King-mong from the Volcano paper and was sort of star struck.

What have you been up to in the DTES?

This summer I had an internship with Youth for Chinese Seniors (Y4CS) under Atira and we did a lot of service-based work. We helped seniors with translation or hospital and doctor appointments, and we also started organizing in Roddan Lodge (at Dunlevy and Alexander). The city is planning to tear it down in 2 years but its process has not been very transparent. These tenants are at risk because most of them only speak Chinese, Chinatown and the Downtown Eastside are the only neighbourhoods they are familiar with, and their rents are $140 to $400. Many of the residents have been in Canada for under 10 years and aren’t eligible for Old Age Security benefits, so they have nowhere to go when they’re forced to move at the end of next year.

I don’t work with Y4CS anymore but I still volunteer with a lot of seniors at Roddan. Just this week I went to Mount St. Joseph’s hospital with a senior to go over her mammogram results! A couple of us have been continually organizing with the tenants. We are trying to build a tenant association so they can lead it themselves and oppose redevelopment and demand clearer communication with the city.

I got involved with Our Homes Can’t Wait (OHCW) this year when I started going to Chinatown Concern Group, which is a Chinese-speaking residents association. Most members are seniors who are concerned about increasing development and rents; they live in Chinatown, Strathcona, and the DTES. OHCW just took off with the town halls. A lot of different groups got involved and signed onto it, so it’s really encouraging to see not only multi-racial organizing but also drug users from VANDU and people from the Carnegie Community Action Project who are all willing to work together. And we forced the mayor to sign our agreement, which was very exciting. Made him sweat!

What makes you want to do this kind of work?

I think it’s important to start local and start with what you know even though there’s endless problems worldwide. This is what I’m familiar with. I have connections here cause my paternal gramma (嬤嬤) lives in the neighborhood and my other gramma (姥姥) also used to live here. I think in the past years I’ve realized that I have immense privilege, because I speak Chinese and English, so I just want to use that to support these seniors who didn’t have the privilege of higher education or learning, or being included in city processes and having the knowledge of policies. It’s tiring but it’s really fulfilling work and I’ve made a lot of good friends in the short time I’ve started getting involved in community activism. I always get fed here too, either by Chinese grannies or here in the Carnegie Centre kitchen!

I learned a lot from Wendy Pedersen, King-mong and Chanel. They are all very patient and this was one of the best summers ever. Everyone down here is so loving and patient and passionate!

Everyone Is An Addict!