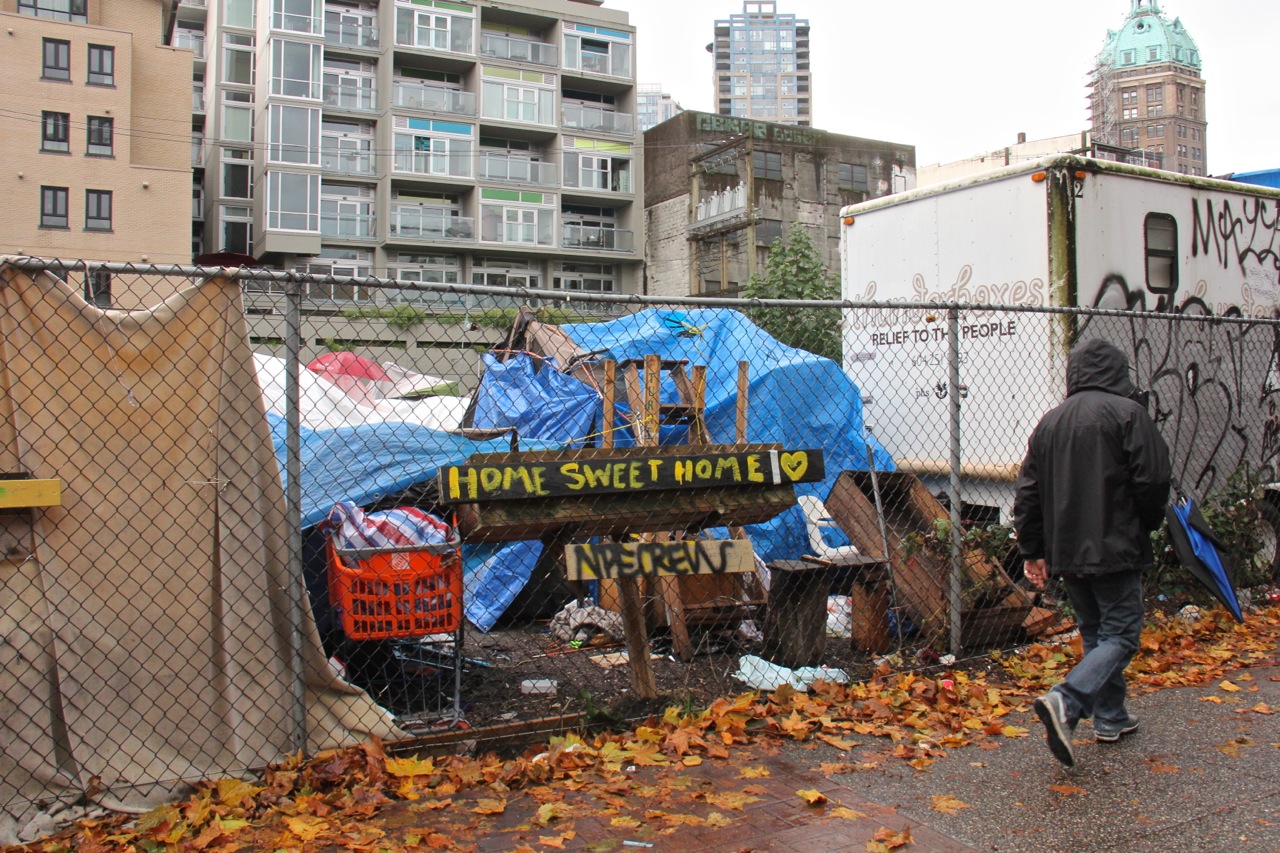 From the affidavit of Helen Schild, resident of 58 tent city

I am a 51 year old woman. My parents passed away when I was 12. I grew up on the street in Vancouver. I lived in a hostel for teenage runaways for a few years. The hostel was positive in some ways, but they put a lot on us. It was hard. I had my eldest daughter when I was 17.

Later, I was married for 15 years and had a daughter who has autism. My husband died in 2008. I was devastated. My husband worked constantly to support my youngest daughter and me.

After he passed away I went downhill. I started using drugs. I couldn’t afford to take care of my daughter any more. I surrendered her to the government. She lives in assisted living. She’s getting the best care that she can.

After that I was so depressed and lonely. Then I met Stacey. We talked and laughed a lot. After a while we started dating.

Shelters are not an option

About 8 years ago I lost my mobile home due to some kind of legal technicality. My husband had taken care of the home and I didn’t know exactly what to do. Stacey and I ended up being homeless together. I lost all my belongings that were in the home too. My whole life was in that place.

I’ve been homeless since then. Sometimes we live in shelters but mostly we live outside. We’ve had bad experiences in shelters.

At the United Church shelter, back when they accepted couples, someone stole all of our stuff even though a security guard was standing right beside our bunk bed. Our stuff has been stolen at other shelters too.

We’ve had arguments and altercations with other people living in the shelters. There are nasty people staying in the shelters, like child molesters—people I don’t want to be around. Once a man freaked out close to me, and it took staff like 10 minutes to do anything. It was really scary.

We slept at the Aboriginal Shelter and got bed bugs. Our legs were so chewed up. Another time all of our stuff was covered by cockroaches. It’s disgusting. There are always bugs in all the shelters. They freak me out and make me feel unsafe and unhealthy. I don’t want to go there, I don’t want to be near those things.

We moved into the camp about 3.5 months ago. We were some of the first people there. We’ve been living there full time ever since.

The camp is good because I don’t have to get up, put all my stuff in a bag and leave, day after day. That’s hard on you.

If you’re in a shelter, they wake you up and kick you out. You have to take all your stuff with you. Out on the street, the City wakes you up at 6am and makes you move on. Doing that every day for 8½ years is unbelievable. It takes a toll on your whole body.

In camp we sleep better. The fresh air is good. It was nice not to have to walk around all night trying to find a place to sleep.

My addictions clinic is right around the corner, so I can go there whenever I need. I’m in methadone treatment and need to be there every day. The receptionist would come by and check in on us, make sure we have what we need. It is easier to connect with service providers in general.

In camp, we’re stable. We can do things, like look for jobs or look for treatment. If we’re on the street or in a shelter we have to pick up all our stuff and carry it around. I can’t carry all my stuff looking for jobs. I need a place to stay.

I feel safer in camp. Shelters are closed in—a lot of staff go into another room and can’t hear what’s going on. It freaked me out. I didn’t feel safe.

When we’re here, we don’t get people teasing us or laughing at us. When we’re living on the street you get people laughing at us, calling us names. We’re binners and people say all kind of awful things to us. Someone threw an egg at me once. In camp here, people leave you alone.

Also, I can be with Stacey. When we’re in shelters we have to stay apart all the time. I miss him when we’re apart. He’s the person I can talk to things about emotionally, about things I’ve been through in my life. We’ve stuck by each other through everything. We want to stay together.

After the first month or so, the City brought us a Port-a-Potty. But there was only one, and one toilet was not enough for 63 people. A lot of us went to whatever other bathroom we could find.

Then they took the Port-a-Potty away because they were shutting the camp down. Then we didn’t have any toilets at all. No body picked up the garbage from inside the camp, either.

We had electricity for a bit. I think it was supposed to be used just for lights. They shut it down because apparently people were using it for other things.

We used to use a propane stove but we can’t any more because the Fire Department said it was a hazard. We love to cook, we used to cook up a storm. We’d cook for other people, and help look after people. People were chipping in, helping to peel potatoes. It’s fun to have good people around cooking together. It makes the place more relaxing, a better environment. Now we’re not allowed because it’s a hazard.

Camp was way better when we had electricity and toilets, and when we could cook. It’s dirtier now that they don’t take the garbage. We’ve cleaned up a lot of things so far, but we need to clean up more. To do more cleaning we need garbage bags, shovels, rakes, etc. I know we can make this place a liveable place if we’re just given a chance. People don’t need to be afraid of us, after all we’re humans too.

When the city came in and told people we had to leave, that was a shock. Some people thought they had to leave right away, so they scattered and left their all stuff. Now we have their stuff that they left behind. I was going to do the same thing at first, because we didn’t know what else to do. If we end up back on the street we’ll lose our stuff anyway.

We won’t have anywhere to go

If they make us leave the camp, we won’t have anywhere to go. It’s so hard to find a place to sleep in the wintertime. Last year I got frostbite on my toes. Shelters were always stocked full.

Stacey and I need stable housing. Without it I can’t eat properly or take care of my body. I’ve lost some of my teeth. We’ve been denied housing so many times because of our credit history. We can’t find housing anywhere. Renting is so hard.

I would rather have a home. I’m tired of moving from place to place. My feet are banged up from walking a ton. My back and hips are sore. I have osteoarthritis on my knees.

Stacey and I both have Hep C. We’re supposed to have treatment for that but we can’t when we don’t have a home. The longer we wait the worst our health will become. We need to be in a stable place. The camp is more stable than being on the street or being in the shelter.