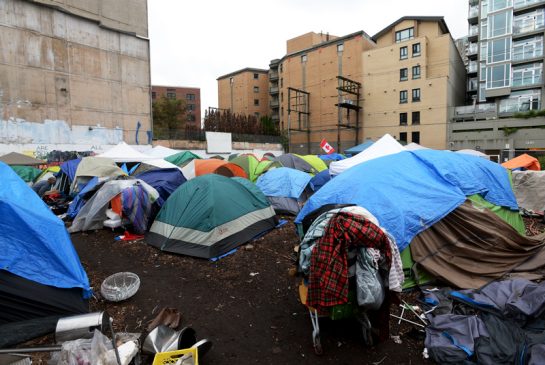 From the affidavit of Joe Livingstone, Resident of 58 W. Hastings Tent City

I am currently homeless. I have been a resident of 58 West Hastings since July 10, 2016. Prior to living there I had an apartment in Chinatown in Vancouver but could no longer keep up with the rent. I had to make the choice between buying hygiene stuff and food or paying the rent. I could not pay the rent so I moved out.

After I left the apartment in Chinatown, I was forced to live on the street. I oftentimes tried to access shelters in the neighbourhood but they were usually too full.

A shelter is not a good place to be

The shelter is not a good place to be. The conditions in shelters are oftentimes unlivable. There is one bathroom for 60 people, shared between men and women. I find that the site at 58 West Hastings is cleaner.

It is safer for many people outside of shelters. A shelter is a contained space with lots of people and only one exit. There’s no ventilation. The staff tries, though, and it’s hard to strike a balance. I don’t want to blame the shelter. There is at least breakfast in the morning. I don’t even think it’s safe for staff in there.

Many of the shelters I’ve stayed in only allow residents to stay for 14 hours—between 7pm and 9am the following day. That means I have to pack up my belongings every morning. I threw out all my belongings because I couldn’t carry it.

It is difficult for me to move each and every morning. I have mobility issues from an accident 10 years that happened on my 41st birthday. I was doing cement work on a construction site in Abbotsford and fell from 35-foot high scaffolding frame. As a result of the accident, I have no calcium in my feet as I crushed both my Achilles tendons. I have daily chronic pain. It gets worse by the day.

When I’m told to pick up my stuff and move along, it is a big deal. My disability makes this difficult for me and I get no assistance or understanding when I am told to leave. As far as I’m concerned, this is a failure on behalf of the City and Police to address the necessities of life.

Safety in numbers at tent city

The site at 58 West Hastings provides safety in numbers and interaction with other people. There is a sense of community there. After the eviction notices were issued on October 21st, people were dispersed and you could really feel the absence of community. I started to miss people even if I didn’t really like them.

The site at 58 West Hastings is also a place where I can leave my stuff behind on a daily basis. I feel it is safer at the site than it is in the shelter or on the street. I have personally had my belongings disposed of by the City for having it on the street, whether I am with my belongings or not. They have confiscated my belongings and thrown them out right in front of me. I feel that people are more willing to respect my belongings when they are at the site because there is a sense that the site is a residence or a private home.

The site at 58 West Hastings also increases my access to service providers and allows me proximity to locations where I can search for work. Work BC is right around the corner and provides access to computers where I can work on my resume and look for work and also work with staff to sign up for programs and to receive assistance. I’m not the only person from the camp who uses Work BC. I have personally seen other residents from the camp at Work BC, accessing its services. I would guess that 50% of the residents at 58 West Hastings access Work BC.

Withholding services to the homeless is a health risk

Since the time I began living at 58 West Hastings, services from the City have come to a dead stop. To my recollection, this happened about a week into my stay there. There is no regular garbage pickup. They shut down the washroom service and they have not started up again. Medical care has been prevented from coming on site due to health and safety dangers for staff.

I know that residents of 58 West Hastings have been forced to use alleys, public parks, and sidewalks because there are no washrooms on site. I know that most of the neighbouring businesses do not allow residents to use their washrooms. There is a stereotype about people living at tent city and people are reluctant to help.

For these reasons, I feel safer, more secure, and more comfortable at 58 West Hastings than in the shelters being offered.

I have been offered shelter at the Cordova Shelter. I have accessed this shelter but in my experience it is not accessible to be. I stayed there last night for two hours; I have terrible sleeps at the shelter. My chronic pain is made worse by staying there. My feet are getting worse, I feel as though I’ve aged 15 years, pain-wise.

I make contributions to the site at 58 West Hastings because there is a lack of help and people need better conditions. I clean, pick up garbage, clear pathways between tents, and help to enforce the Fire Order. I am getting fire extinguishers from Canadian Tire. No one from the City or police or fire department has offered to give us fire extinguishers. I am forced to ask the public for funding in order to get fire extinguishers so that people at the site can be safe.