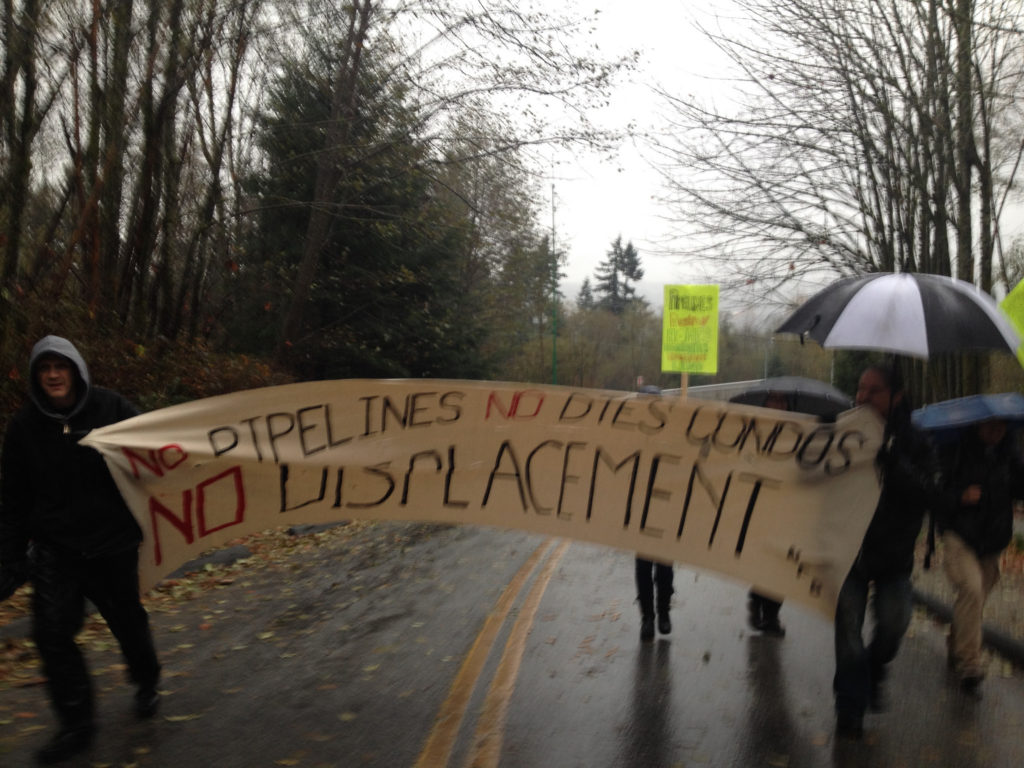 Alliance Against Displacement sent the following letter to Climate Convergence organizers on November 24, 2016. Our intention for this open letter is to better unite movements against displacement and for climate justice. We believe that our movements cannot ally with individuals or organizations that cause direct harm to other movements and to the lives of oppressed peoples.

We have received responses from individual members of Climate Convergence, some of which are very encouraging of dialogue and open to meeting and building our struggles together. Some of those involved in Climate Convergence have encouraged us to publish this letter publicly to make this a movement-discussion, and not just one between two organizations.

In light of Trudeau’s November 29, 2016 approval of Kinder Morgan’s Trans Mountain pipeline and Enbridge’s Line 3, we believe that it is only more urgent that our movements unite and find common ground to fight against the forces of real estate displacement of low-income communities, colonial dispossession of Indigenous peoples, and climate injustice.

Alliance Against Displacement would like to bring to your attention concerns that our group has about the participation at your event “Stop Kinder Morgan: No Consent No Pipelines” on November 19, 2016 of Vancouver Mayor Gregor Robertson and Burnaby Mayor Derek Corrigan. This letter addresses frustrations that boiled over for us at the Climate Convergence but it addresses some dynamics that are more widespread. So while we plan to publish it as an open letter, because it is focused on this event, we want to share it with you first and give you chance to discuss it before we make it public. We plan to publish it on Wednesday November 30th and hope to hear from you before then so we can publish it as a dialogue rather than just an open letter.

AAD understands that both Mayors Robertson and Corrigan have professed their opposition to the Kinder Morgan pipeline, and therefore appear to be on the side of the environmental justice movement. This brings some notoriety to your campaign. But at what cost? We hope you agree that the environmental justice movement does not exist in a silo. Justice in matters of the environment cannot succeed without also seeking justice for low-income, working class, and Indigenous people who live in this environment. From this perspective, it is frustrating to watch the Climate Convergence welcome Mayors Robertson and Corrigan onto the stage under your big tent of environmental justice. It actually makes our struggles against displacement, gentrification, and urban dispossession more difficult. Greenwashing helps them cover up their social cleansing of our communities and appear to be “progressive” politicians.

Within the last eight months, Alliance Against Displacement has twice approached one of your member groups, Burnaby Residents Opposed to Kinder Morgan Expansion (BROKE), sharing our complaints against Mayor Corrigan and revealing his direct role in facilitating the displacement of Burnaby residents. BROKE did not reply to us for the open discussion we expected. We hope Climate Convergence will enter into discussion with us to consider ending the practice of greenwashing neoliberal politicians.

The reasons we are protesting the participation of Robertson and Corrigan at the “Stop Kinder Morgan: No Consent No Pipelines” event should be clear. Alongside a multi-year legacy of siding with developers over low-income and homeless residents of Vancouver, the same week Mayor Robertson spoke at this rally he succeeded in winning a court injunction filed for by the City to remove the existing tent city at 58 W Hastings. The court injunction grants the City and police the power to forcibly remove tent city residents on Thursday November 24, 2016. Residents at 58 have nowhere else to go. Robertson’s pursuit of this injunction goes against the charter rights of homeless people. It is a human rights violation.

Mayor Robertson has a history of claiming Vancouver as the City of Reconciliation, but he displaces homeless people from their self-built communities which are disproportionately Indigenous. Robertson has a track record, particularly in the Downtown Eastside, of destroying low-income communities with city-organized gentrification schemes and deploying state forces (police and courts) to violently displace those his policies make homeless. There is a disconnect between Robertson’s greenwashing and “ending street homelessness” rhetoric, and low-income DTES residents’ reality. Robertson’s participation in your event garners him a photo opportunity that benefits him much more than our movements.

Burnaby’s Mayor Corrigan also shares Robertson’s dismissal of low-income and homeless residents of our cities. In addition to Corrigan’s demoviction rezoning policies that have resulted in the demolition of 600 affordable rental housing units in the last few years, and the eviction of 1,200 low-income, working class and immigrant families, he is now ramming through his “Downtown” Metrotown Plan. The “Downtown” Metrotown Plan will displace 6,000 residents of affordable 3-storey walk-up buildings, to replace their homes with expensive condo towers. Mayor Corrigan refuses to take responsibility for his mass displacement plan. Instead he passes zoning laws that favour the profits of developers by replacing a working-class and multiracial community with condos for professionals and investors.

Making connections between struggles in theory and practice

Aside from our belief that no movement for justice should throw any social group under the bus, or align themselves with politicians who do, we also see direct connections between opposition to the Kinder Morgan pipeline expansion and the fight for housing for low-income, working class, and homeless people in BC.

It has been documented that natural resource extraction projects in BC are directly tied to increased rents, housing shortages, and displacement. One significant outcome of proposed natural resource extraction projects, of which Kinder Morgan is just one, is the already-occurring rising costs of rental housing in towns and cities across B.C. that are directly along the lines of planned pipelines. For example, rents have exploded while vacancy rates have collapsed in Prince Rupert and Kitimat in anticipation of the proposed LNG facility. As the BC Liberals move forward in their plan to increase revenues from natural resource extraction projects, both at home and abroad, this will place increasing pressure on the housing markets in and around Vancouver, as the personnel infrastructure and bureaucracy necessary to run these projects injects more higher income residents into the Vancouver area.

Cut ties with neoliberals to connect with social movements

By hosting the Vancouver and Burnaby Mayors we feel the concerns and struggles of low-income, Indigenous, and working class members of housing and anti-gentrification movements are being dismissed, deprioritized, and ignored in the Climate Convergence. Greenwashing drives a wedge between our movements that already suffer from, in our opinion, significant solidarity gaps. In our organizing work against mass displacement by the demovictions planned and orchestrated by Derek Corrigan, for example, we have been frustrated by the decision of environmental justice groups to prioritize photo-op unity with this mayor over building unities in struggle with low-income, working class, Indigenous, and homeless people fighting displacement. Are symbolic unities with state-actors more important than struggle alongside people fighting the violence of state-organized displacement?

We believe that if our movements can be better aligned we can form stronger resistant power to capitalist resource extractive industries and their effects on Indigenous, low-income and working class people. We are asking you to sever your ties with Mayor Robertson and Mayor Corrigan and stop greenwashing their social cleansing policies. To support you in considering this decision, we would also like to offer to meet with you to present our perspectives regarding Mayor Robertson’s and Mayor Corrigan’s roles within our communities. This meeting would give our groups the opportunity to learn from each other and initiate a dialogue that could help us build towards solidarity across our anti-displacement and environmental justice movements.