Over the past few weeks, as Alliance Against Displacement worked on this collective statement in solidarity with the camps and struggle at #NODAPL, the camps came under violent, militarized assault by police. The mainstream media has not covered this repression with the attention it deserves. To see a video of the militarized assault on one camp by police, see this link. On Sunday November 20th the Standing Rock Medic & Healer Council published a news release about violence inflicted on the defenders by US soldiers’ on behalf of the Dakota Access pipeline. And on November 25th, the U.S. Army Corps of Engineers issued a letter to the Standing Rock Sioux Tribe warning that the military will forcibly displace the main camp of water protectors and allies on December 5th. This notice of violent displacement adds urgency to the AAD statement, but it does not change its main point: that the victory of the #NODAPL resisters will be a victory for us in struggles against displacement and dispossession no matter where we are on Turtle Island. – Volcano editors. 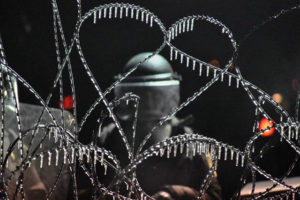 We extend our support to the Standing Rock Sioux Tribe, which we’ll refer to from here on by their proper name, Oceti Sakowin, the many Indigenous peoples who’ve joined them, and all others fighting the United States in opposition of the Dakota Access Pipeline (DAPL), and in defense of Mni Soce (the Missouri River). #NoDAPL!

For more than 200 years, since the United States government claimed ownership over enormous stretches of Indigenous territory with the Louisiana Purchase in 1803, the Oceti Sakowin have defended the Mni Soce against poisoning by resource extraction corporations, commodity transportation infrastructure, and its agents in the US Army Corps of Engineers and private resource extraction corporations. This fall Oceti Sakowin are protecting the river, and the water it carries, against its latest threat, the Dakota Access Pipeline.

The pipeline, which Oceti Sakowin land defenders call the black snake, is being pushed by Energy Transfer Crude Oil Company, LLC to move crude oil from oil fields in Three Forks North Dakota to a terminus in Illinois, where the crude would be shipped to refineries. Land defenders are stopping the pipeline from crossing underneath the Mni Soce. The defense of this site has stopped the construction of the pipeline, blocked the shipping of crude oil, and therefore interrupted the accumulation of the wealth of the land from Indigenous nations by a capitalist corporation through colonial means. Alliance Against Displacement supports this interruption of capital accumulation.

Alliance Against Displacement (AAD) fights capitalism and colonialism because we believe that in Canada and the United States both non-Native working class and Indigenous people cannot successfully struggle against one force without struggling against the other. Across Turtle Island real estate-driven displacement and resource-extraction dispossession are intrinsically connected by governments that manage the continent’s dominant, two-headed capitalist and colonial economy. Our activist strategy is to engage and support community struggles across Turtle Island against displacement and dispossession.

Most of our day-to-day community struggles face this two-headed snake in its capitalist form: urban (and suburban) displacement. Because of the pressing demands of these community struggles that occupy our time and therefore often dominate our political perspectives, we talk and write a lot about gentrification, mass evictions, police brutality and harassment, poverty, and the rule of private property as a dehumanizing force in the lives of our communities. Yet, the work of frontline Indigenous leaders of the anti-extraction, anti-colonial struggle at #NODAPL has inspired us as we struggle with communities against the head of this connected, urban capitalist snake. From these mostly urban places in western Canada, on paved over but still embattled territories of the Coast Salish people, we declare that the fight to stop the Dakota Access pipeline is inseparable from our daily struggles. The fate of the water protectors at #NODAPL is the fate of our people. 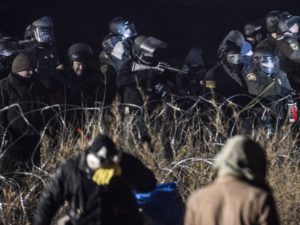 Water protection in a Sacrifice Zone

From the tar sands to mining tailings ponds to methylmercury poisoning resulting from mega-dams, environmental racism results in US and Canadian settler-states treating Indigenous communities as “sacrifice zones.” The DAPL’s proposed route crosses Standing Rock Oceti Sakowin lands specifically because residents of Bismarck, North Dakota, which is more than 90% white, spoke out against the pipeline going near their homes. Rather than cancel the pipeline, the Dakota Access company redirected it through a sacrifice zone.

What is currently happening at Standing Rock must be situated within a broad context and history. It also constitutes a specific and significant moment of conflict with colonialism, convergence between Indigenous nations, and solidarity from non-Native activists. As Nick Estes writes, “Camp Oceti Sakowin, Red Warrior Camp, and Sacred Stone Camp, the various Native-led groups standing in unity against DAPL, have brought together the largest, mass-gathering of Natives and allies in more than a century…. The prolonged peaceful encampment practices an unsettling counter-sovereignty. It has drawn the support and solidarity of more than 200 Native Nations and countless thousands of allied forces sending a clear message to corporate interests.”

The state violence at Standing Rock is a continuation of colonialism, and the resistance against it must continue. We oppose the building of this pipeline and all others that would cross Indigenous territories without free, prior, informed consent. We oppose the police violence used against the people and against the land at Standing Rock. We support all water protectors and land defenders. We honour and thank those who are putting their lives on the line to save the land and Mni Soce.

We recognize and affirm that Mni Wiconi – Water is Life – is highly relevant where we live. The May 9, 2016 spill of 30,000L of diesel fuel in Plumper Bay continues to affect Lekwungen (Songhees and Xwsepsum/Esquimalt) people’s seafood harvesting and ceremonial activities. W̱SÁNEĆ nations (BOḰEĆEN/Pauqachin, SȾÁ,UTW̱/Tsawout, W̱JOȽEȽP/Tsartlip, and W̱SÍKEM/Tseycum) are dealing with the threat of a massive LNG plant floating in the Saanich Inlet, and Steelhead LNG’s interference in relationships between MALAXEt and W̱SÁNEĆ people. Multiple Coast and Straits Salish nations are fighting the proposed Kinder Morgan Trans Mountain pipeline expansion that would result in sevenfold increase in tanker traffic in the Salish Sea, including legal challenges by səl̓ílwətaʔɬ/Tsleil-Waututh and Sḵwx̱wú7mesh/Squamish nations. The tactics of land defense used at #NODAPL may be examples for struggles here, and the principled, Indigenous-led defense of the land set by defenders at the #NODAPL camps may influence our struggles here as well. We will continue to resist the continuation of colonial violence and accumulation.

Our statement of solidarity with Standing Rock should also be read as a commitment by AAD to  deepen our work in struggling against colonialism and dispossession, and to continue building unity across communities against the twin evils of capitalism and colonialism.