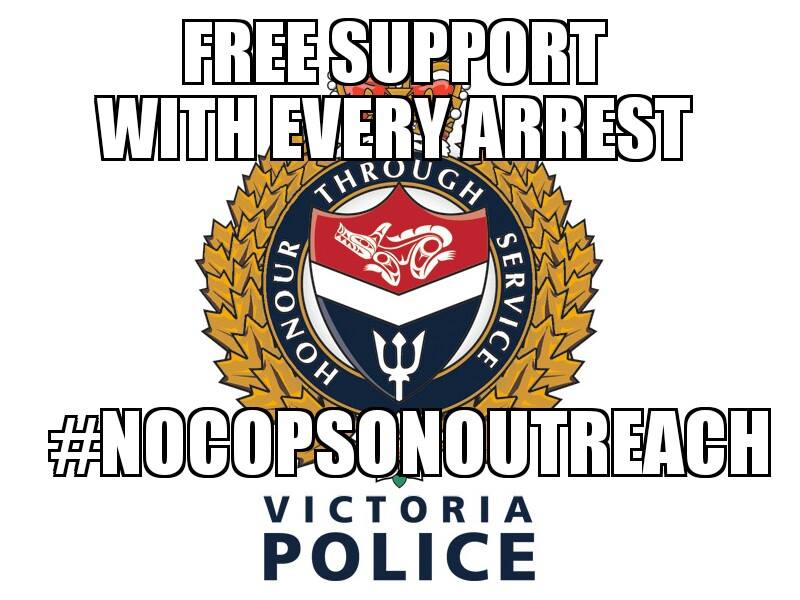 On January 9, acting Victoria Police (VicPD) Chief Del Manak requested that Victoria City Council add $240,000 to VicPD’s $52 million annual budget in order to embed more police in mental health services. Manak’s budget ask is for two more officers to liaise with the four Assertive Community Treatment (ACT) teams in Victoria, tripling the number of officers involved in this mental health response team. A two-hour debate resulted in postponement of the decision until January 26th to give the public a chance to weigh in on whether the police should have an increased role in mental health services and whether the City should be the source of funding for this expanded role. 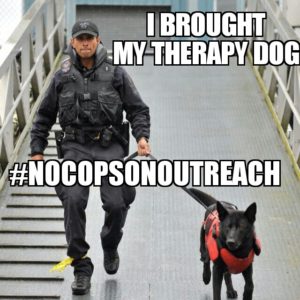 Last year, borrowing from a Toronto-based campaign, activists in Victoria used the #nocopsonoutreach slogan to run a campaign against cops as mental health workers. People spoke at Council meetings and wrote letters about the harms perpetuated by police against those living with mental health and substance use issues. Activists challenged the suggestion that police can play dual roles as both enforcers of unjust laws and helpers of those in mental health crisis, and rejected the decision to allocate mental health funds to policing. They called for the City to improve structural conditions that affect mental health, and explore alternatives to policing such as mental health response teams and culturally safe services without the harms of criminalization.

In 2016 Victoria Council voted against the additional funding but VicPD went ahead with putting more cops into mental health services anyway, reconfiguring its existing budget to insert another officer in the ACT teams.

This year VicPD are trying again to get more money by re-packaging the same proposal, boosted by their new Mental Health Strategy. Chief Manak asserted that in the past 6 months the presence of the additional officer increased the capacity of ACT to take on more clients by protecting health workers during visits with the most “dangerous” of their clients. He claimed that without police present these clients would have no access to care. VicPD’s position is that police and health workers sharing essential information will get people help earlier, and Manak argued that police involvement in care could prevent criminalization, as though it were possible for police to be involved in a non-criminalizing way. 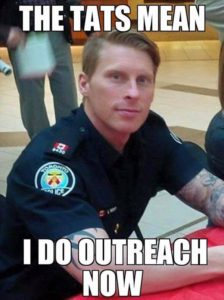 The City Council debate, which did not include any opportunity for public comments, was illuminating. While some Councillors raised important critiques of the VicPD proposal, others used destructive stereotypes of deviant, dangerous, out-of-control, mentally ill people. These myths positioned police as the only ones capable of managing certain people. More important is what was missing from the conversation: there was no evaluation of the ACT teams from the perspective of clients and no report on the impact of police involvement on access to mental health services. VicPD’s report to Council treated police involvement in mental health services as natural and normal.

An ad hoc coalition is encouraging people to write letters and attend the Council meeting on the 26th to speak out against cops as mental health workers.