On the last day of January I knocked on Nick’s door to give him a pamphlet about his rights as a renter being demovicted in Burnaby. I gave him my routine statement that we can fight together to stop the developer from abusing tenants while evicting them. He was indignant. “What’s the point? If you don’t have money the government doesn’t care about you,” he said, “I’ve had it with Canada, I’m going back to my country.” I conceded. “You’re right,” I said, “They don’t care. That’s why we think that it’s time to refuse to obey their laws and take over these buildings.”

Nick didn’t buy it right away but his expression and his body language changed; he opened his door all the way and called his wife to come join in the conversation. Afterwards I was struck by the significance of this moment. I had knocked on the door of a stranger and discussed collaborating together to disobey property law and make non-capitalist claims over property. At the level of popular feeling I think this is evidence of the end of what has been called “social democracy,” which was the postwar belief that the government should care for working class and low-income people who are exploited and abused by the capitalist division of wealth and power. And it is evidence, though partial and initial, of the potential for a resurgence of a radical critique of – and revolutionary alternatives to – capitalism. For these working class renters who have been shut out and ignored by a city council that calls itself social democratic, property laws feel oppressive and unjust, and resistance feels more realistic than appeals or protest. 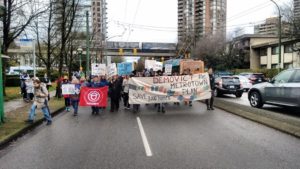 Demovictions and the end of social democracy

Under Mayor Derek Corrigan, the social democrat Burnaby Citizens’ Association (BCA) holds every seat in Burnaby City Hall. Corrigan’s BCA has single-handedly created the demovictions crisis in the Metrotown neighbourhood with rezoning policies so liberal that the right wing Fraser Institute has heralded Burnaby as a pro-development civic example.

Mayor Corrigan has overseen the development of a municipal version of post-social democratic politics. In the name of market pragmatism, he has given up on welfare state reforms and embraced the power of the free market. Corrigan answers the crisis of housing affordability and the shortage of rental apartments by trying to harness the power of the free market to build. Similarly to how UK’s Prime Minister Tony Blair justified the slaughter of Iraqi civilians by US-UK troops in 2003, Corrigan considers the displacement of the existing working class community to be collateral damage as he clears municipal regulations out of the way of growth at all costs. The fact that the new condo towers are not affordable to those being displaced is a detail less important than the imperative of growth.

Corrigan’s deregulation of market development forces in Burnaby has significance beyond Burnaby itself because the BCA is a municipal branch of the provincial NDP. Activists who have called on the BC NDP to stand up for renters against Corrigan’s demovictions policies – and his proposed plan to rezone all 3,000 low-end of market apartment units in Metrotown – have come up against the insular and self-interested NDP bureaucracy. Mayor Corrigan is married to the long time NDP MLA for the Metrotown area, Kathy Corrigan. And Kathy Corrigan’s replacement hopeful in the upcoming Provincial election is BCA council member Ann Kang.

The attitude of residents like Joseph, of an older renter family in Metrotown being demovicted by a BCA-approved condo development, shows that Corrigan’s market policies are marring the NDP as a whole. When I knocked on his door Joseph said, “The NDP is not looking after the people. We can’t look to them to help us… maybe we need a revolution.” 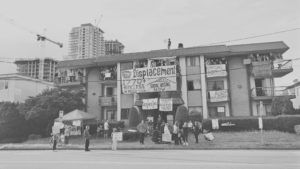 The human impact of Corrigan’s municipal policies are hard to stomach. At a community townhall on February 1st an elderly Black muslim woman walked up to the front of the room with her walker. She said that she is being demovicted for the third time in two years. The first demoviction was out of Coquitlam, where the City’s rezoning policies demand that developers rehouse those they evict. She was demovicted again right away and moved to this third apartment building, where she has only been a few months. “Where can I go?” she asked, “BC Housing says they can’t help, and all the apartments are so expensive.”

After she spoke, Martin Fernandez, who was demovicted from an apartment building on Imperial Street in the summer of 2016, rose to his feet and called out to the room, “They have no compensation for us; they are taking our homes.” He called on those with eviction notices, “Don’t go! We have no choice, they can’t throw us all out in the street, we must refuse to leave our homes.”

The NDP’s complicity in Corrigan’s free market displacement of thousands of working class renters is exposing the inability of late-social democracy to address the housing and homelessness crisis in western Canada. And in this space, other, non-electoral alternatives are emerging. In Burnaby this alternative is taking shape as a “People’s Metrotown Plan,” where the community is drawing out its needs in policies underwritten by a principle of “development without displacement.” Underlying this vision for a community shaped by people’s needs – not the free market – is a shared disdain for evictions. The “we won’t go” sentiment growing in the apartments and hallways is shared by the demovicted, who will wait passively for the help of politicians no more.