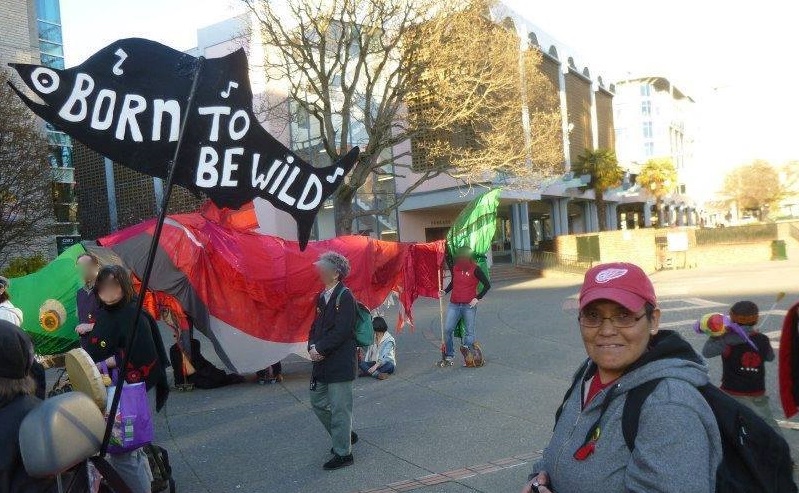 Heiltsuk activist, parent, and contributor to many communities, Mary was fierce, funny, playful, loving, generous, and never afraid of a confrontation with power. She took action in defense of Indigenous territories; in support of safe consumption services and Super InTent City; and against criminalization of Indigenous resistance and people living in poverty.

Family was extremely important to Mary. She is predeceased by her parents Don and Mary and brother Michael, and is survived by her children Shannon and Steven/Bear, and siblings Bruce, Mitchell (and partner Jean White), Edward, Jeff, Wes, and Peter (and partner Reg Sam).

Mary was born in Bella Bella. Working as an archaeologist for many years, she made sure anyone doing archaeology in Heiltsuk territory was held to ethical standards. Coming from a fishing family Mary was passionate about Indigenous food sovereignty, and even after moving to Lekwungen lands continued to source 70-80% of her food from Heiltsuk territory. Whether leading a vocal takeover of aquaculture meetings, pushing a 27-foot salmon puppet through downtown streets, throwing rotten farmed fish on the Legislature lawn, organizing Heiltsuk food events, taking part in ceremony to cleanse waters, or teaching, Mary was steadfast in defense of wild salmon and herring.

In the 1990s Mary and the Vickers family took multiple actions to stop Western Forest Products from clearcutting Glditas Daqvu (Ingram-Mooto watershed) including reoccupying their traditional lands. Mary was also critical of mainstream environmental groups’ disrespect for Heiltsuk ways and sovereignty in their push to create the “Great Bear Rainforest.”

Mary also took part in many actions in solidarity with other Indigenous nations and pan-Indigenous actions, including protests against the 2010 Olympics, clearcutting, desecration of burial grounds and sacred sites, and fossil fuel expansion. She cooked frequently for Super InTent City, events and actions.

She fed us in so many ways. Mary, we miss you.

Money to help with the family’s expenses can be sent to vickersfamlilia@gmail.com or via her online GoFundMe account named “Mary Vickers Celebration of Life.”