By No Cops on Outreach Victoria, Lekwungen Territories On Feb 15, 2017
Share FacebookTwitterGoogle+Email 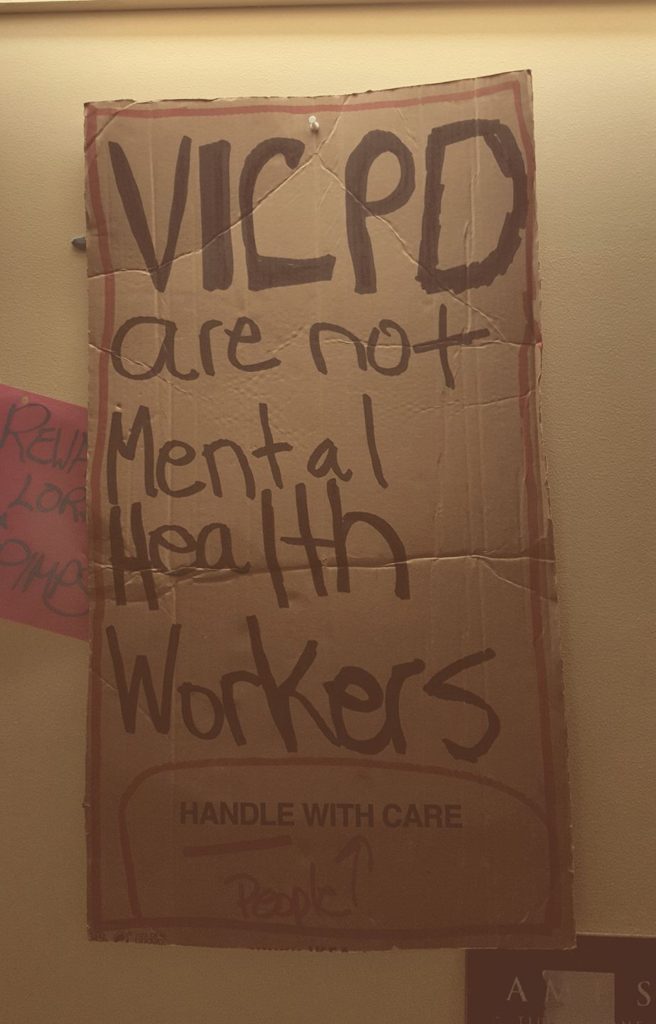 Editors note: In a disturbing trend toward community policing as a response to state-sanctioned violence, police are asking for and receiving funding for outreach and health care activities that they are not qualified to offer and that cause more harm in communities most impacted by criminalization, stigma, and poor access to healthcare. Regionally, we are seeing this trend in the funding of a 12-cop outreach team on the Surrey Strip & a community policing centre in the Downtown Eastside as a response to the overdose crisis. Borrowing from a campaign started by people who use drugs & health care workers in Toronto called #nocopsonoutreach, activists in Victoria have for two years opposed the funding of police officers in mental health teams. This year the motion passed despite a hard fought campaign that split the Council and community. The following is an open letter addressed to City Council and the Health Authority to reflect on the impact of this decision.

We write to reflect on Victoria City Council’s January 26th vote in favor of the Victoria Police Department’s (VicPD) request for an additional $240,141 to embed two more officers in Island Health’s Assertive Community Treatment (ACT) mental health teams. We write to acknowledge those individuals who shared their experiences of police as agents of violence, who told us that cops will never be their helpers, and whose voices were ignored and silenced.

The role of police is to enforce laws that uphold the status quo and protect the interests of a predominantly white, housed, middle and upper class population. People with mental illness – especially those who live at the intersections of poverty, criminalized substance use, racism, and colonialism – are perceived as a threat to the status quo and are stereotyped as deviant or sick. The decision to add officers to ACT teams is based on an idea that people with mental illness are dangerous and must be contained, and that police are the only ones who can do this work. Council’s decision to fund the police as part of a health care team perpetuates the falsehood that it is up to police to protect “ordinary citizens” from those living with mental illness.

Policing is incompatible with good health care. There is no evidence that police engagement constitutes best practice in mental health services. While police might make a distinction between those among them trained to work on ACT teams, versus other officers, that distinction is not so easily made by service recipients – many of whom have histories of institutional trauma inseparable from policing. Placing officers on ACT teams brings the police powers of surveillance, regulation, and apprehension into the everyday lives of those who receive services from these teams. Forcing individuals to interact with police in order to receive mental health care minimizes and dismisses how people with mental illness have been harmed by the criminal justice system. It also ignores the reality that people with mental illness are regularly harmed, targeted, and killed by police.

City Council failed to listen to those most affected by this decision. Organizations supporting the VicPD’s funding proposal included BC Housing, the Victoria Downtown Business Association, Island Health, and executive directors from large social services organizations including Our Place Society, Victoria Cool Aid Society, and Pacifica Housing. Those who spoke and wrote in opposition were people and organizations directly representing people most affected by the decision and their advocates, including the Society of Living Illicit Drug Users (SOLID), the Committee to End Homelessness Victoria, and Together Against Poverty Society (TAPS). They included people living with mental illness, living in poverty, and experiencing ongoing violence from colonialism, racism, criminalization, and stigmatization. They included front-line workers who witness first-hand the harms of police involvement in the lives of their clients. Our fight exposed a clear and deep divide between those who have power and privilege and those who do not; between those whose lives matter and whose are disposable.

In response to community concerns, City Council has directed the VicPD to engage community agencies and a council of individuals with lived experience of homelessness to develop an evaluation framework. This response is an attempt to co-opt the principles of meaningful inclusion. Meaningful inclusion requires agencies and governments to work with individuals who will be most impacted by a decision before that decision is made, instead of evaluating an imposed decision after the fact. Community engagement at this stage is a means to gain consent for a project that is not supported by people living with mental illness and their supporters. This process overlooks the power that police have to coerce individuals and organizations to participate.

Positive experiences and relationships with individual police officers does not equalize power between service users and police, nor does it erase the systemic violence that many will continue to face as a result of Council’s decision. Evidence of the unequal power dynamic between police and people living with mental illness played out in the inability of some individuals to attend the Council meeting due to fear of being seen and further targeted by the police, and triggered due to past trauma caused by police violence. Many who did attend faced intimidation by Acting Chief of Police Del Manak in the hallway outside Council Chambers. Manak’s attempts at “engagement” were coercive, as engagement is not possible when one has the power to put the other behind bars.

The mental health system has never been designed around the needs and safety of people living with mental illness. In our campaign, we heard consistently that the problem is not only inserting police into mental health teams, but that the use of police is just one more way the system uses coercion to achieve compliance and control of clients — a profoundly harmful approach to mental health services. People with mental illness need affordable and appropriate housing, liveable incomes, and control over their health care, homes, and lives. We ask City Council and Island Health to take seriously the recommendations for models of mental health services that do not involve police (e.g., CAHOOTS). We ask you to take seriously the experiences of those who have only known police as destroying their lives, families, homes, and lands. We ask you to reflect on how your support for police in a healthcare setting will harm those who already face extreme levels of surveillance, regulation, and violence at the hands of the state. Increased police involvement in health care will only further the violence and injustice taking place in our community.