Trans women and sex worker communities are no strangers to the death and disappearance of our friends and comrades. Motivated by the recent pain of losing yet another of our trans sisters, who was found dead behind the Patricia Pub after being missing for a year, working class trans women in the DTES and East Vancouver have come together to end our gendered class exploitation. As working class people and as women we see that we will continue to suffer until this society – organized on the basis of sexism, racism, and the exploitation of labour – is overthrown. The following is an edited transcript of a roundtable discussion at our inaugural campaign meeting. This is the second half of the transcription. Read the first half here.

What sticks out to us as the most immediate example of us being socially degraded?

S: We’re considered hypersexual by default. The very fact that we’re trans makes people think that we’re probably very kinky by default or we’re perverted or we have some evil sex side to us. But you know, a lot of us have, I think, pretty normal sex lives. Even if some of us do sex work, we’re not really caught up with hypersexuality the way we’re assumed to. It’s normal to us. When you do it as a job, that’s what it is, a job. It’s like flipping burgers or some shit. It’s just labour that gets you money. It really is. It’s assumed that we want to be hypersexualized. I don’t like the hypersexual attention that I, as a trans woman, and so many other trans women are forced to receive. It can come in the form of remarks at us or people touching our bodies without consent. It all just comes from this idea that we’re trans because of some sexual fetish. We’re assumed to be sexual by default just by being who we are.

K: For me, doing sex work, I can tell the difference of when men call my ad and they intentionally keep me busy for a certain amount of time and they just play jokes with me for the end result to be, “You’re ugly and you’re not a woman. You’re a piece of shit.” Basically this is what they say in their messages to me. So, we are being targeted in that field. With women as well, they’re targeting us by flagging our ads out of jealousy. I’ve had women come up to me and ask me to date them and I say no and then they turn around and antagonize me and make remarks. They make up this story that I’m this kind of person. That I’m a sex freak and that masturbation and things like that are not normal – that I do them fantasizing about them or something like that. It makes it hard for us to want to be a woman when we get that kind of response from them. Like, why would I want to be part of you if you’re going to treat me this way? We fight for them.

“We Threw the First Stone!” Trans militance and solidarity

How does our social marginalization affect our capacity to be political agents?

K: We fight for everybody. I see that in work, I see that everywhere. Everywhere I go. Like, I stood in line one time for 20 minutes at McDonalds with nobody else in the line up. I just stood there. Not one of them wanted to serve me. It’s like, what the hell? That’s the public. This is what the government is portraying and it’s falling into the society and then society is bringing it back to us in a really violent and aggressive way.

S: Cis-gender standards turn us against each other. They make up all this bullshit about passing or whatever. It doesn’t even fucking exist. You know what a cis-passing trans woman is? I don’t know! I really don’t know.

L: Yeah, show us one. A working class trans woman that completely gets to pass doesn’t exist – or at least not in our circles.

S: It’s pitted against us, and these types of anger, they come out in our community, sometimes. I think a lot of times, when we’re experiencing all this violence and we’re getting all this anger towards us, it poisons our community. I think it’s a symptom of internalized violence, for sure. It gets so deep in your head. It’s like a sliver. A piece of broken glass in your foot and you can’t get it out.

L: Half a century ago when the gay liberation movement was starting, the rhetorics of the anti-gay activists were saying, “This is a disease, this is a psychological impediment. This is people not being able to think for themselves. They’re wrong. They’re morally disgusting.” We’re seeing the same kind of thing within community about being a trans woman now because we’ve asserted ourselves to such an extent that we actually become public images. I think that it’s also tied to the suppression of working class people and the suppression of low income people and the suppression of Indigenous people. These things are linked together through a religious belief in the gender binary as productive for capitalism and colonialism. We all know the gender binary is crap and doesn’t exist.

K: It’s just everywhere. Some from the gay community [in my building] as well. They don’t remember where they came from. We’re [trans women] the next target now. They’re including themselves in that as attackers. It’s like, why should we put up with that? We shouldn’t. They should be grateful to us for being so strong in the movement.

L: We had solidarity with them.

S: I had seven cops on top of me. I’m 130 lbs. Seven cops for a little girl with depression. They were literally squishing my tits to the ground like I didn’t have none. I haven’t looked into the BC Mental Health Act, but I do know that one of its separate sections is admittance of a female person. There’s a whole section on how you’re supposed to admit female people. If I had implants they would have popped. 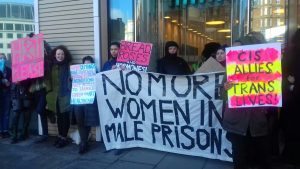 L: We have so few elders because they are murdered. We’re the emerging trans elders.

S: We pretty much are. It’s fucked. And it hurts. But we’re not going to die. We’re going to live forever. We got to, at this point. I’m not going to survive all that crap just to die at 26 or something. I’ve got to survive. I need space to.

L: Thanks. Everyone should feel proud and strong for exposing that level of vulnerability. It takes courage and it takes political strength and personal strength to even just say those things out loud. I think that’s the first step. I do believe that saying those things out loud, even though it’s around trusted company, is the foundation of a movement that challenges cis-supremacy.

J: I think pushing for this model of collective provision is the way out – to not have these individual identities be the say of how people are justified existing in space or not, but being part of a community or network is going to be, I think, a better political foundation.