Presented to BC Housing in September 2017 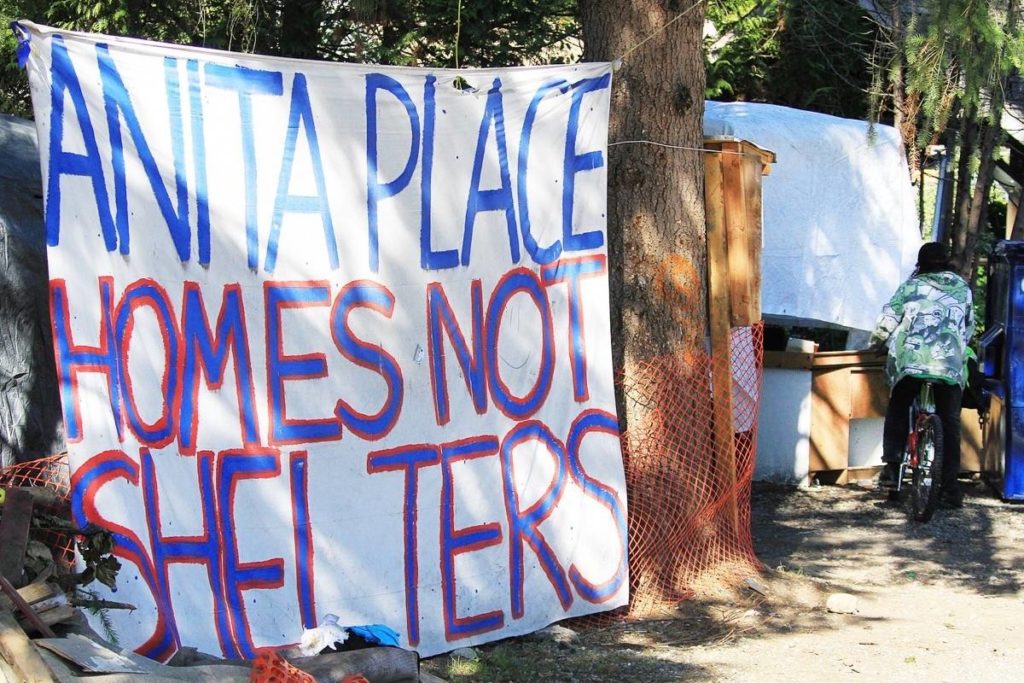 Maple Ridge Tent City announces negotiations with the NDP BC Government, stands with people in the housing emergency everywhere

Anita Place tent city started May 2, 2017 to give homeless people in Maple Ridge a place to stay, a place to be, and a place to be safe… and a place to advocate for the social housing we so desperately need. Anita Place is a survival camp that, in five months, has supported hundreds of impoverished people with emergency shelter, food and water, health services, and a safer community space that we are denied by government austerity and the cult of “individual responsibility” in the often hostile world around us.

Anita Place has successfully shone a public light on homelessness and poverty in the Fraser Valley through the frontline leadership of homeless people themselves. We are strong in our autonomous community space. As the fall weather turns we are entering negotiations with the City and Provincial governments to “decamp” Anita Place from a position of strength and power.

Over our first five months Anita Place has weathered storms – natural rain storms, political condemnation from City Hall, cultural scorn from the Ridgeilante mob, and violence and intimidation from police and bylaw officers. In June the City of Maple Ridge marshalled its entire legal power to crush us in the courts, but faced with the overwhelming legal defence posed by the camp and Pivot Legal Society, they stayed their application and announced that the City will advocate for housing, not police action, as a way to close the camp.

Rather than a “citizens committee” of business and property owners who disdain the homeless, to close Anita Place, homeless residents must direct the homes we need. The coming winter will not intimidate us into human warehouses you call “shelters;” we demand decent, dignified, housing – apartments that we can call homes, for ourselves and for all others in our community. We won’t settle for any less.

This is an outline – in principle – of our conditions for decamping Anita Place:

So far we have refused to comply with the City of Maple Ridge’s demand that we tell them the exact number of people residing in Anita Place at a point in time. Why? Because the community Anita Place represents is much larger than the number of people who are staying in camp at a given moment. It is not possible for the entire street population of Maple Ridge to stay in Anita Place at once because the site is not big enough, we do not have resources to support a larger group on one site, and because the Fire Chief won’t let us build the structures we would need in order to make the site comfortable and safe for a larger group. At our camp we have even saved housed people and recreational drug users from overdoses, but we have not been recognized for our work.

Anita Place is conducting a Homeless People’s Homeless Count and we are confident that when we are done we will register more than 200 people in emergency need of housing in the Maple Ridge area. We of the diasporic Anita Place are on the waterfront where we amass tickets from CN cops, in the Caring Place shelter where we languish on bunks isolated from public view, in the bush off Dewdney where we hide from renegade bylaw officers on the prowl, and deep in the mountains where our camps are ransacked by bears and Ridgeilantes.

These 200 people are the community of Anita Place – our camp is the visible tip of the iceberg and the fighting top of the spear – if you house the people who happen to be in camp at a particular moment, their spots will fill as others come out of hiding in the bush, on the waterfront, and in your miserable shelters. 200 units of new apartments will end Anita Place because 200 new apartments will be the beginning of ending our homelessness.

We negotiate for ourselves and advocate for homes for all

Anita Place directly represents the street population in the Maple Ridge area, and we are negotiating with the Provincial government for housing for these 200 people in immediate need. But we are part of a bigger community that spreads far beyond the borders of this small city. We stand united with low-income communities in Vancouver, Surrey, Victoria, and everywhere in BC and call on the BC Government to immediately meet with these low-income communities and start building emergency housing for all these people who are facing the coming cold. We offer our support in contacting and setting up meetings with these communities.

The Anita Place community badly needs permanent, publicly owned and secure social housing. In the past we have been promised housing with the condition that we went into shelters while we waited. We broke down our camps and went into warehouse shelters… for years… and the housing promises never came true. We won’t make that mistake again. We are proposing a two-step solution to our housing crisis:

Step one: We want emergency modular housing not shelters. We are calling on the Province and City to set up 200 units of immediate short-term housing (modular housing or buying/leasing a hotel). Modular housing built at Main and Terminal in Vancouver cost $85,000 per unit. Each apartment is 250 sq/ft and is self-contained with a kitchen and bathroom.

Step 2: Build 200 units of permanent social housing. We will stay in this temporary emergency housing until we can move into new, self-contained, 600 sq/ft (minimum) social housing.

What we mean by housing: Resident-run not “supportive” institutional housing

When low-income community leaders at Super InTent City in Victoria won housing through their nine-month-long fight they were overjoyed. While they had won an important victory, it was tainted by the way the housing they won was run by the government-commissioned service provider, PHS Community Services. PHS promised Super InTent City residents that their rights in their new housing would be protected by the Residential Tenancy Act and they would not be moving into an institution. PHS lied.

For a year, Super InTent City residents have fought for their rights and freedoms against the regulatory controls of the PHS management that deny them guests, surveil them with cameras, lock them down on their floors, refuse them access to common spaces, and evict and prosecute them with criminal charges when they resist. Ten times the number of people have died of overdoses in PHS housing than did in Super InTent City. We won’t be conned into an institution branded as housing. We demand that both the emergency housing and the permanent social housing be run following these principles:

New housing is an opportunity for the services we need

Maple Ridge lacks basic services that low-income people depend on for their survival. We envision that services for the broader low-income community be built into the temporary and permanent social housing.

Justice in the world outside: Stop the war on the poor

Housing and health self-determination not re-institutionalization