Indigenous homelessness in a developer’s dreamland

Victoria and Saanich, where the tent city lies, is a developer’s dream, home to unfettered development and a booming real estate market. In a little over two years, the face of downtown has changed rapidly with new high-end developments like “Pandora” and “The Yellow on Yates” appealing to youthful, “green” and health conscious, tech industry (read: white) couples. At the same time, low-income housing is being rapidly torn down to make room for these developments, renovictions and demovictions are becoming a norm for renters in the region, and the low vacancy rates make for an impossible rental market, especially for low-income racialized and criminalized people, whose applications are turned down and passed over.

Over the last 9 months, Chrissy Brett has operated a mobile tent city that she calls a “Pop Up Prayer Vigil” in neighborhoods across Southern Vancouver Island. Through the existence of these mini tent cities, she has provided shelter to homeless people while bringing awareness to the impact of the housing and poverty crisis and lack of supports and services for Indigenous families. The latest site of the pop-up prayer vigil has grown so much that it has become a more typical, long term tent city, finding some permanence on land occupied and claimed as property by the Municipality of Saanich, British Columbia, and Canada.

Recognizing and opposing this occupation, the organizers of the camp seek to use, not claim ownership to the land, to provide a home for Indigenous people who are displaced from their dispossessed ancestral territories. Chrissy Brett explains, “I was taken in the 60s scoop and I have Anishinaabe, Cree, Mohawk teachings. Do they expect me to go back to those territories to practice my culture? Where do we practice our culture and ceremonies when 50% of Indigenous people live off reserve?” Like all tent cities Brett’s camp is a sanctuary for homeless people from the pressures of poverty and police harassment, but because of her claim to anti-colonial, spiritual sanctuary, this particular camp also raises a challenge to a Canadian colonial project that has internally displaced Indigenous people and dispossessed them of their direct family and national connections as well as of their lands.

Brett’s political stance is embedded in her own identity as an urban Indigenous woman and places urban Indigenous people at the forefront of the fight against homelessness. According to Brett, “Canada, Provinces, and Municipalities need to recognize that Indigenous culture is equal to non-Indigenous religious freedoms that are protected by the Canadian Charter. If they recognize churches’ right to provide religious sanctuary, then we should have the same right to provide political sanctuary for those without homes. The earth is our church.” 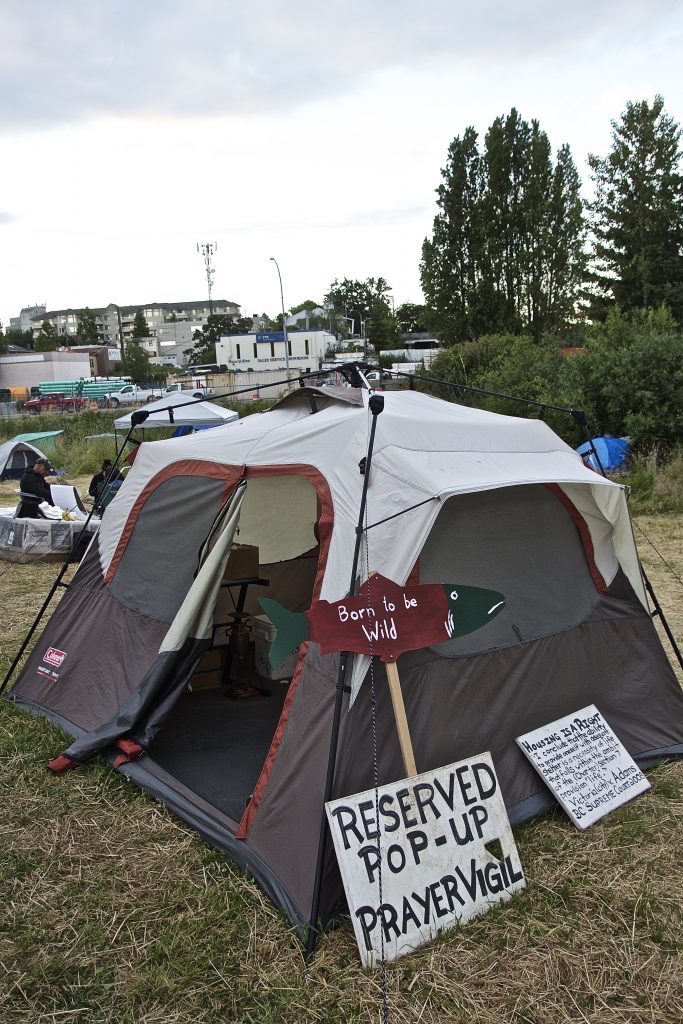 In a study released this week concerning Indigenous people in Toronto, Dr. Janet Smylie, a Métis physician researcher speaks to the impact of colonization and assimilation policies enacted through residential schools and the foster care system on the mental and physical health of urban Indigenous people. They found that over 90% of the survivors of residential schools and foster homes lived below the low-income cut off and more than a third were precariously housed or homeless. A quarter were found to not have enough to eat. More than a quarter have had a close friend or family member go missing, and one out of three had a close friend or family member die as a result of violence caused by another person.

Dr. Smylie’s study connects the problem of urban Indigenous people who have been displaced from their territories and dispossessed of their families to the destructive effects of Canadian assimilation programs. If we read residential schools as what theorist Irving Goffman calls “total institutions” then it makes sense that the assimilation logic of these schools was a lie: the residential schools and foster programs were never about incorporating Indigenous people into Canadian society, they were about destroying Indigenous cultures and societies and replacing them with nothing. Survivors of these destructive programs exist in a void where they have been cut off from their home communities and also shut out from Canadian society. Chrissy Brett’s camp is a place where urban Indigenous people are making a place of safety and belonging, where they are healing. It is more than a homeless tent city, it is a place of urban Indigenous resistance and survival against the totality of Canadian colonial violence.

While the Saanich camp is about 50% Indigenous, Brett extends her political and cultural commitment to both Indigenous and non-Indigenous people: “My culture is to feed people, to ensure that none of our people are left behind. In this tent city, I’m taking these teachings and applying them not only to us, but for all our cultures.” For many, the camp is a place to seek shelter and protection, to combat daily displacement, and the violence and theft experienced in shelters and on the street.