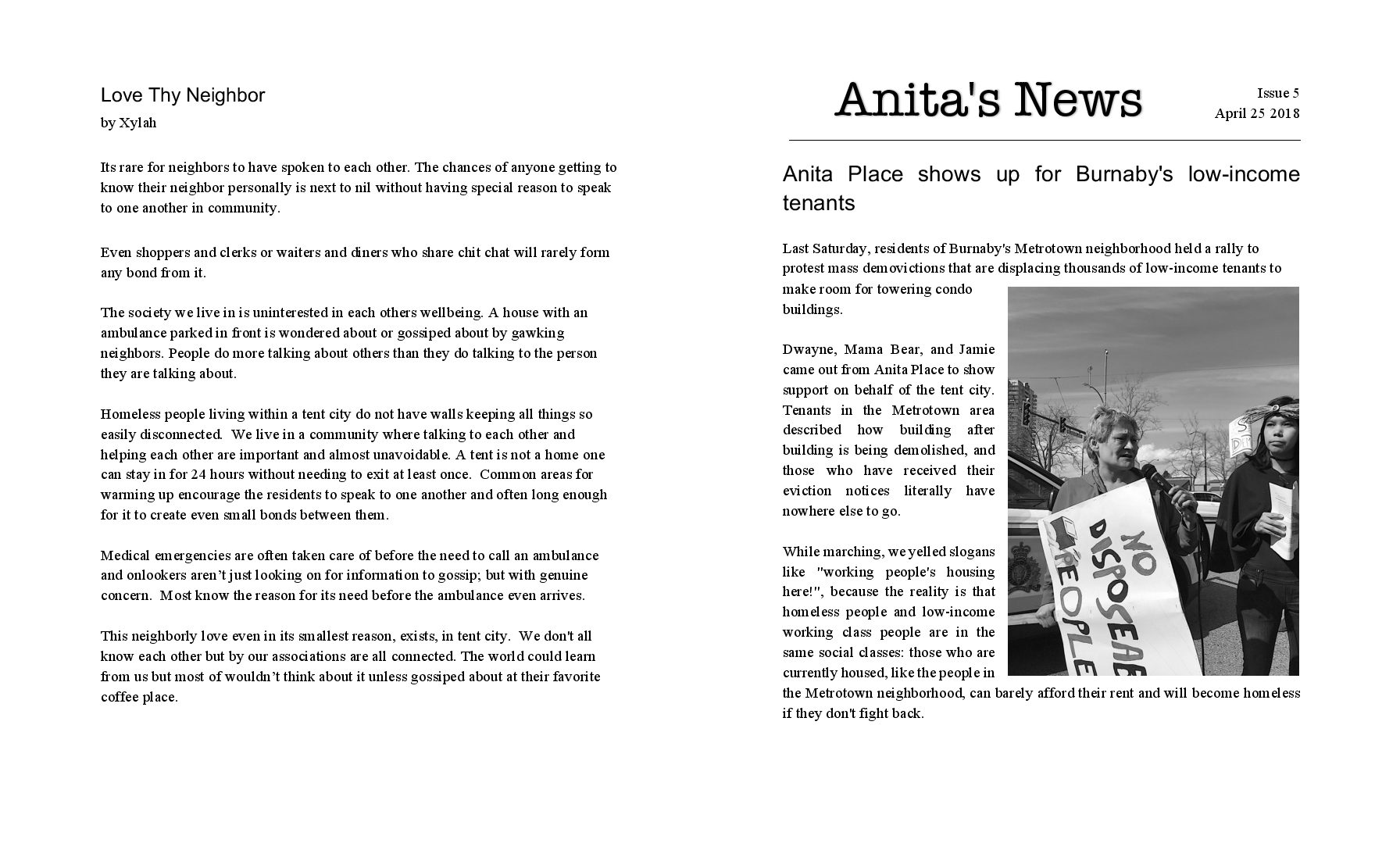 Dwayne, Mama Bear, and Jamie came out from Anita Place to show support on behalf of the tent city. Tenants in the Metrotown area described how building after building is being demolished, and those who have received their eviction notices literally have nowhere else to go.

While marching, we yelled slogans like “working people’s housing here!”, because the reality is that homeless people and low-income working class people are in the same social classes: those who are currently housed, like the people in the Metrotown neighborhood, can barely afford their rent and will become homeless if they don’t fight back.

Jamie went to the march because we all need homes. He said that even though tenants in Burnaby are currently housed, that “it will be the same fight for them”, because the housing crisis is making low-income people homeless. “Everything is powered by greed. That’s the only thing that people listen to: money or pain.”

In other words, since poor and homeless people don’t have any money, the only way we can push back is to band together and cause inconvenience and suffering. Jamie said, “we’re causing the Ridgelante idiots pain just by being here.” Anita Place is causing the government pain so that they’ll build the housing we need.

Dwayne said that he went to the march because he’s tired of people getting bullied out of their houses. “There’s a lot of people out there who have a voice but are too scared to say anything. They should all stand together and do something about it, because you’re able to. We’ve been here a year and we’re not supposed to be—we’re here illegally but we’ve got feet to stand on.” Echoing Jamie’s ideas around how to push back, Dwayne talked about how people need to come together in groups in order to feel like they have a voice.

The Stop Demovictions Burnaby campaign is planning a We Won’t Go campaign, to organize tenants in the area to refuse to leave once their eviction dates arrive. When people are organized together, they create their own power. Just like how tent cities break property rules that prevent homeless people from surviving, a We Won’t Go campaign for tenants will break property rules that benefit landlords but force people into the streets.

One tenant might not feel powerful enough to mount an I Won’t Go campaign, but when people know that others in their neighborhood are banding together, it makes them feel like change is possible. Having the support of Anita Place at the march showed that when one group stands up, like we have at Anita Place, it makes other groups realize they can too—whether it’s a tent city in Nanaimo, or a neighborhood of working class tenants in Burnaby.

Mama Bear said, ” It was a good experience to go to the housing protest in Burnaby. I feel like I was losing my appreciation for helping other people, for being part of the struggle, I found it there. By going there I felt lucky to have the camp. It was hard to start out, we didn’t know if people would come and fight. We can help people because of what we have built.

You can’t be any better than you already are. I’m not trying to be Saint Linda, I’m just trying to help people. It was Tracy’s dream to help people and we have to thank her for that. But what we have, we have built together. Going to protest in Burnaby helped me remember that.”

Its rare for neighbors to have spoken to each other. The chances of anyone getting to know their neighbor personally is next to nil without having special reason to speak to one another in community.

Even shoppers and clerks or waiters and diners who share chit chat will rarely form any bond from it.

The society we live in is uninterested in each others wellbeing. A house with an ambulance parked in front is wondered about or gossiped about by gawking neighbors. People do more talking about others than they do talking to the person they are talking about.

Homeless people living within a tent city do not have walls keeping all things so easily disconnected.  We live in a community where talking to each other and helping each other are important and almost unavoidable. A tent is not a home one can stay in for 24 hours without needing to exit at least once.  Common areas for warming up encourage the residents to speak to one another and often long enough for it to create even small bonds between them.

Medical emergencies are often taken care of before the need to call an ambulance and onlookers aren’t just looking on for information to gossip; but with genuine concern.  Most know the reason for its need before the ambulance even arrives.

This neighborly love even in its smallest reason, exists, in tent city.  We don’t all know each other but by our associations are all connected. The world could learn from us but most of wouldn’t think about it unless gossiped about at their favorite coffee place.