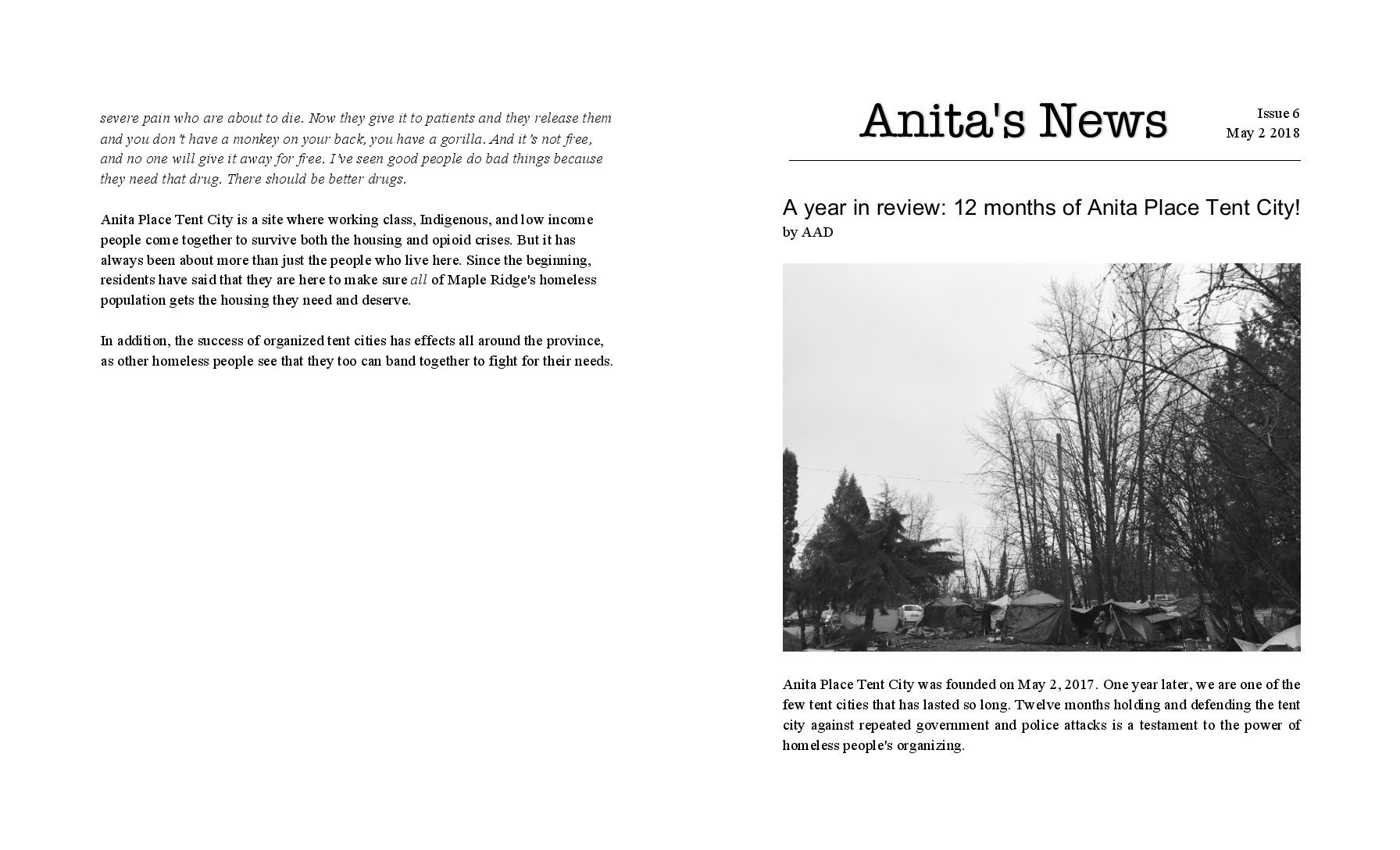 A year in review: 12 months of Anita Place Tent City!

by Alliance Against Displacement

Anita Place Tent City was founded on May 2, 2017. One year later, we are one of the few tent cities that has lasted so long. Twelve months holding and defending the tent city against repeated government and police attacks is a testament to the power of homeless people’s organizing.

Just one week after the tent city was founded, Maple Ridge bylaw officers and cops showed up and started throwing people’s tents and belongings into a garbage truck. In response, homeless people marched from City Hall to the camp, asserting themselves against police and bylaw violence.

In an interview with The Volcano newspaper, Joe recalls the day of the raid and shares what he thinks is the biggest lesson of the past year:

We already know it but pigs are not our friends. That day that they tried to come and take down the camp was a very impactful day. We showed them and ourselves that we can fight back. We had tools we could use that could hold them at bay – to take their feet out from underneath them. It showed that when shit goes down, the camp leadership will step up. We are prepared and we can do what it takes. We have solutions and we can resist.

The City tried two more times to break up the camp by filing injunctions in court, but failed. One of the results of the City’s second injunction was that the Province started providing the camp with some resources—the warming tent, modular bathroom unit, and a few building supplies. These gains were a direct result of the militant actions of Anita Place residents, who refused to back down in the face of government attacks.

The demands of Anita Place Tent City have been clear and consistent since day one: 100% tenant run social housing. Despite that, the Provincial government continues to push models of supportive housing.

In her interview with The Volcano, Mama Bear explains how supportive housing treats poor people like inmates in a prison:

I got put into Alouette Home Start and I didn’t like the quiet and the isolation. It felt like a jail. There are cameras everywhere, I’m not even sure they don’t have a camera in my suite. You have a fob, and you can’t go to the 4th floor if you have a 3rd floor fob. They’re supposed to be getting you ready for your own place but it feels like babying.

I’ve lived outside for 21 years and it’s more comfortable for me in a tent than in a place like Alouette.

When you walk through the doors in Alouette, they mark you down as being home. If you leave they mark you down as leaving. They track how often you come and go. You can’t go out a back door or it will set off an alarm. Everything is tracked. They say you can’t have a visitor without ID and most of my friends are homeless and don’t have ID. I feel like I’m stuck upstairs in my prison cell.

Anita Place Tent City is not just a site of survival, but a place where homeless people define and share their political analyses. Mama Bear’s frames supportive housing as a way of punishing people for being poor. But we know that homelessness is created by government policies, not the individual actions of poor people.

By refusing to build the housing people need, the government is ensuring that people continue to die on the streets. Dwayne tells The Volcano about how the government refuses to save the lives of poor people and drug users:

The government is the reason that people are dying. They let people have this fentanyl that is made for soldiers in the field, for people in  severe pain who are about to die. Now they give it to patients and they release them and you don’t have a monkey on your back, you have a gorilla. And it’s not free, and no one will give it away for free. I’ve seen good people do bad things because they need that drug. There should be better drugs.

Anita Place Tent City is a site where working class, Indigenous, and low income people come together to survive both the housing and opioid crises. But it has always been about more than just the people who live here. Since the beginning, residents have said that they are here to make sure all of Maple Ridge’s homeless population gets the housing they need and deserve.

In addition, the success of organized tent cities has effects all around the province, as other homeless people see that they too can band together to fight for their needs.