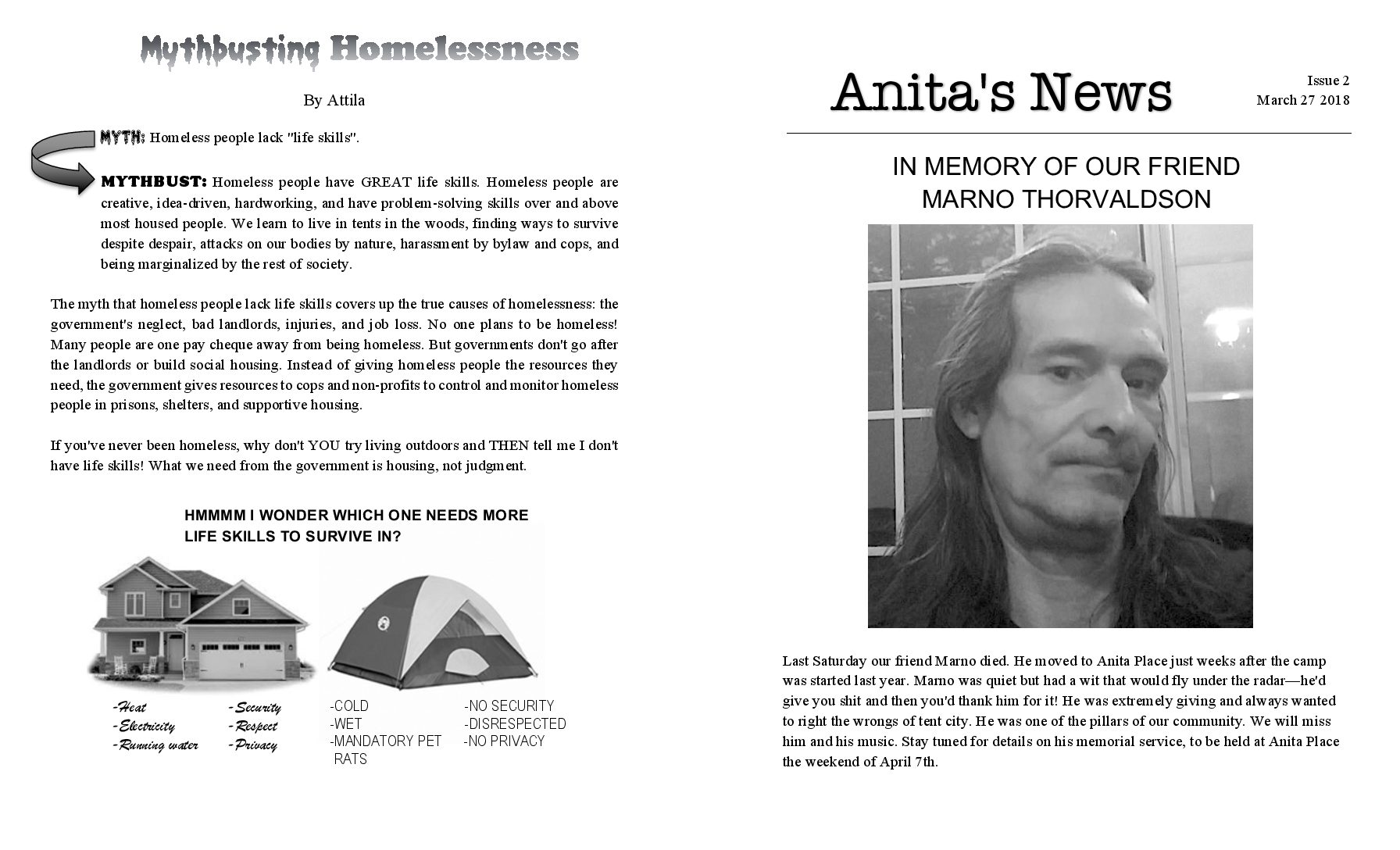 IN MEMORY OF OUR FRIEND MARNO THORVALDSON

Last Saturday our friend Marno died. He moved to Anita Place just weeks after the camp was started last year. Marno was quiet but had a wit that would fly under the radar—he’d give you shit and then you’d thank him for it! He was extremely giving and always wanted to right the wrongs of tent city. He was one of the pillars of our community. We will miss him and his music. Stay tuned for details on his memorial service, to be held at Anita Place the weekend of April 7th.

On Saturday March 25th representatives from Anita Place tent city went to meet with homeless people and their supporters across the water in Nanaimo. Anita Place residents planned to go too but had just been hit by Marno’s death and decided to stay behind this time. Those of us who could go met over dinner in a park (including hotdogs roasted on a fire that ended with a visit from the fire department and RCMP) with about a dozen homeless people and 3 key supporters. The struggle against the displacement and oppression of homeless people in Nanaimo is heating up and Anita Place should be part of this fight.

A new group of homeless activists started a camp on the lawn of Nanaimo City Hall in order to protest against the City’s decision to refuse Provincial money for a supportive housing building. The City used the complaints of an anti-homeless group of property owners as an excuse to turn down the new housing. The 50 homeless people at City Hall Tent City demanded funding and permission for a shelter, new housing, and a drop-in centre for homeless people. On Monday March 19th the City of Nanaimo met and voted to speed up the funding and opening of the drop-in. The City immediately put pressure on the City Hall Tent City to displace – the very next morning City bylaw officers set on campers telling them if they didn’t leave, the City would seize their tents.

Lies from the City and Fire department disoriented and divided the camp. The Fire Chief told campers that if they left City Hall they would be allowed to set up permanent camps in two city parks. But when people moved to one park police showed up and told them to leave. Then they moved to the other and hours later bylaw officers showed up and said they were only allowed to camp 7pm to 9am, which is a right set by BC Supreme Court decision—not a favour from City Council. As result of the City’s lies and bylaw officer intimidation, people have been scattered into different parks for night-by-night camping and back into hiding in camps.

Nanaimo is sort of like a Maple Ridge on Vancouver Island. The number and makeup of the homeless community is similar, and so are the forces they face – City and police control, anti-homeless hatred, and the similar poverty services.

Like in Maple Ridge, there is a lot of poverty and homelessness – the 2016 Nanaimo homeless count was of 176 people (Maple Ridge’s was 124) and homeless people say there are about 150 people in hidden camps in the north end of town and hundreds of others spread around. Homeless people in Nanaimo are informally organized in order to survive. They stay hidden away from the public, the cops, and bylaw in pretty long term camps. And, like in Maple Ridge, homeless people have a tight community where they all know each other, which means they already have organizing networks, which are just starting to be consciously politicized.

One 60-something homeless man named Carlos told me that he and his girlfriend get moved sometimes 5 or 6 times a night by cops, private security guards, and “volunteer rat” vigilantes who drive them from park to doorway to street corner and back again. It sounded to me like Maple Ridge before Anita Place.

When we met with those recently displaced campers in Nanaimo, we explained that the hardest part of starting Anita Place tent city was establishing the camp. It’s hard to get the homeless community together and united behind a single action, and it’s hard to defend a new camp against police and bylaw who are used to bullying homeless people back into hiding. Nanaimo campers have started talking about their demands for a tent city, the agreements that campers should follow, a corny name, and, most importantly, a site that they can take and defend using both the legal precedents set by Anita Place (along with Victoria’s Super InTent City, Vancouver’s Sugar Mountain, and Abbotsford’s Dignity Village), as well as direct force. It may soon be time for Anita Place solidarity to go from verbal expressions of support to taking a trip overseas to defend our friends in Nanaimo as they create a new front in our common struggle against the violences of homelessness.

Mythbust: Homeless people have GREAT life skills. Homeless people are creative, idea-driven, hardworking, and have problem-solving skills over and above most housed people. We learn to live in tents in the woods, finding ways to survive despite despair, attacks on our bodies by nature, harassment by bylaw and cops, and being marginalized by the rest of society.

If you’ve never been homeless, why don’t YOU try living outdoors and THEN tell me I don’t have life skills! What we need from the government is housing, not judgment.