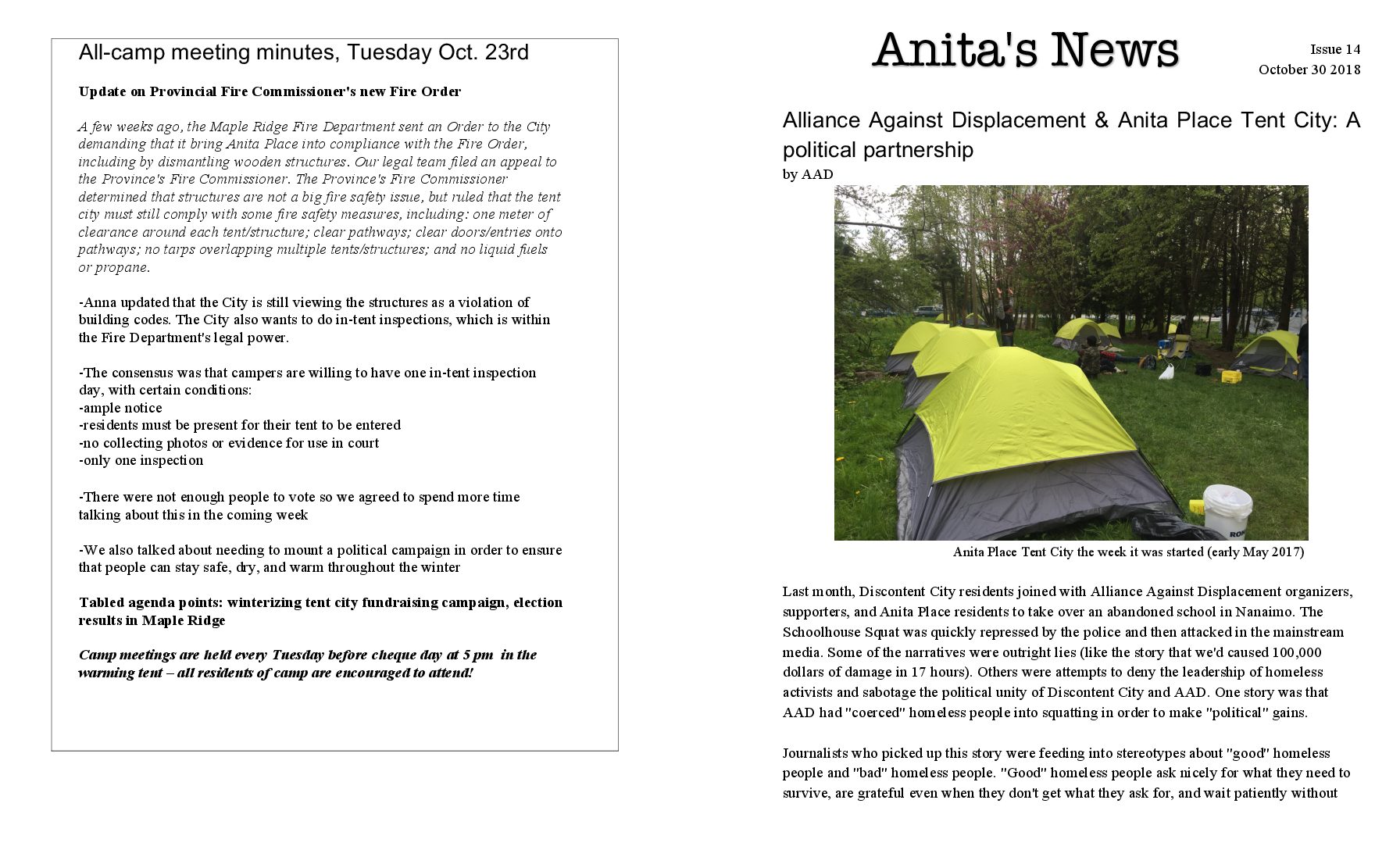 Last month, Discontent City residents joined with Alliance Against Displacement organizers, supporters, and Anita Place residents to take over an abandoned school in Nanaimo. The Schoolhouse Squat was quickly repressed by the police and then attacked in the mainstream media. Some of the narratives were outright lies (like the story that we’d caused 100,000 dollars of damage in 17 hours). Others were attempts to deny the leadership of homeless activists and sabotage the political unity of Discontent City and AAD. One story was that AAD had “coerced” homeless people into squatting in order to make “political” gains.

Journalists who picked up this story were feeding into stereotypes about “good” homeless people and “bad” homeless people. “Good” homeless people ask nicely for what they need to survive, are grateful even when they don’t get what they ask for, and wait patiently without rocking the boat, even if that means dying in the streets. “Bad” homeless people are those who politicize their experiences: they point out how the government’s failures lead to mass homelessness, no matter how hard individuals try to keep themselves from sleeping on the streets. Never mind that when homeless people organize, they’re portrayed as having a “political agenda”, but when anti-homeless bigots organize to keep shelters and housing from being built in their neighborhoods, they’re just “concerned citizens”. The good homeless-bad homeless dichotomy only serves to normalize homelessness, stigmatize homeless people, and construct them as a passive group in need of charity and pity. In other words, it erases the leadership of homeless activists, and it erases the history of how real change happens in society: through political activity and protest.

The reality the media fails to grasp is that everything Discontent City residents have won, they’ve won by being political, by protesting, and by breaking the law. And the same is true for Anita Place. We’re a far ways from every resident being clean, dry, and warm, but the resources we do have – the warming tent, the bathrooms, and some supplies – we won by illegally taking this land, refusing to retreat even in the face of police repression and legal attacks, and standing our ground. In other words, Anita Place and Discontent City have always been political, and that’s why they’ve been able to squeeze some resources out of the government. Without a firm political foundation, no tent city stays up for long. This is where AAD comes in.

AAD first made relationships with the homeless community in Maple Ridge during the Cliff Avenue tent city in 2015. The City shut down that tent city, justifying its eviction by pointing to the opening of a Rain City shelter. After Cliff Ave shut down, AAD organizers Ivan and Dave kept in touch with the homeless leaders who had help start it. When the closure of Rain City was announced just a year and a half later, those leaders decided it was time to start another tent city, this time, in honor of Anita Hauck, a leader of the street population who died in 2015.

AAD was there alongside Joe, Ed, Rick, Tracy, Mama Bear, Tanna, Stevie Ray, and others, on the day Anita Place started. In the first couple days, not many people came to the site – they were waiting to see what police and bylaw would do. Within the first week, police and bylaw showed up and tried to violently dismantle the camp. They grabbed tents and threw them into a truck, but AAD organizers and tent city residents immediately jumped into action, pulling tents that had been thrown in back out and sitting in tents that were still up, so that they couldn’t be stolen. We successfully stopped the pigs from crushing the new tent city, and kept that momentum by organizing a press conference and march to City Hall. These overtly political acts are what sets Anita Place aside from the kind of informal tent cities that pop up, only to eventually be crushed by bylaw or police. Without the political organization and mobilization that AAD helps support, Anita Place wouldn’t be here today.

AAD organizes in Maple Ridge, Victoria, Saanich, Nanaimo, Burnaby, Surrey, and Vancouver. All of our work is with working class and Indigenous people, homeless and housed, and all of our work is political. Specifically, we are an anti-capitalist and anti-colonial organization. We see the housing crisis as an inevitable result of a system that privileges property over people (even abandoned, unused property) and that requires the genocide and dispossession of Indigenous nations. One of the advantages to having campaigns across southwestern BC is that we can help foster political alliances, for example, by supporting Anita Place residents to visit Nanaimo. These alliances are crucial, because it shows that Anita Place is not alone – we are fighting the same battle here that homeless people are fighting all over the province and world.

As the struggle for dignified housing continues, we can expect that the media will continue to attack AAD and try to present it as politically distinct and separate from the homeless communities where we’ve been organizing for years. A recent opinion piece by a right-wing journalist, Tom Fletcher, attacked AAD and called homeless people “wasted street people, mostly feral males left to raise themselves in a culture that worships sex, violence, drugs and rock and roll”. The piece suggests that people in tent cities are not really homeless, and merely making a ruckus in order to get handouts. Fletcher’s arguments are sensational and ridiculous, but they don’t have to be rational in order to serve their purpose, which is to dismiss the political agency and protests of homeless people, as well the relationship between AAD and people in the communities we organize in.

At Anita Place, AAD is the Chair of the Council (which means we regularly convene and chair council meetings and all-camp meetings), helps put out press releases and organize press conferences, and offers political advice and guidance to council and tent city residents, based on our years of doing community survival campaigns. We also use our resources to help people travel to other sites of struggle. So to be clear, we’re not social workers (who connect individual homeless people with services and resources offered by the government), we’re not lawyers (who have to abide by the rules of the court), and we’re not charity workers (who see homeless people as needing a “helping hand” to integrate into mainstream society). We’re organizers and activists. Our political “agenda” is to expose the crises of poverty and displacement that are intrinsic to the colonial and capitalist system our society is founded on, so that we can end these systems and create something better. We see homeless people as revolutionary leaders who are on the frontlines fighting for everyone, and we’re proud to stand beside you.