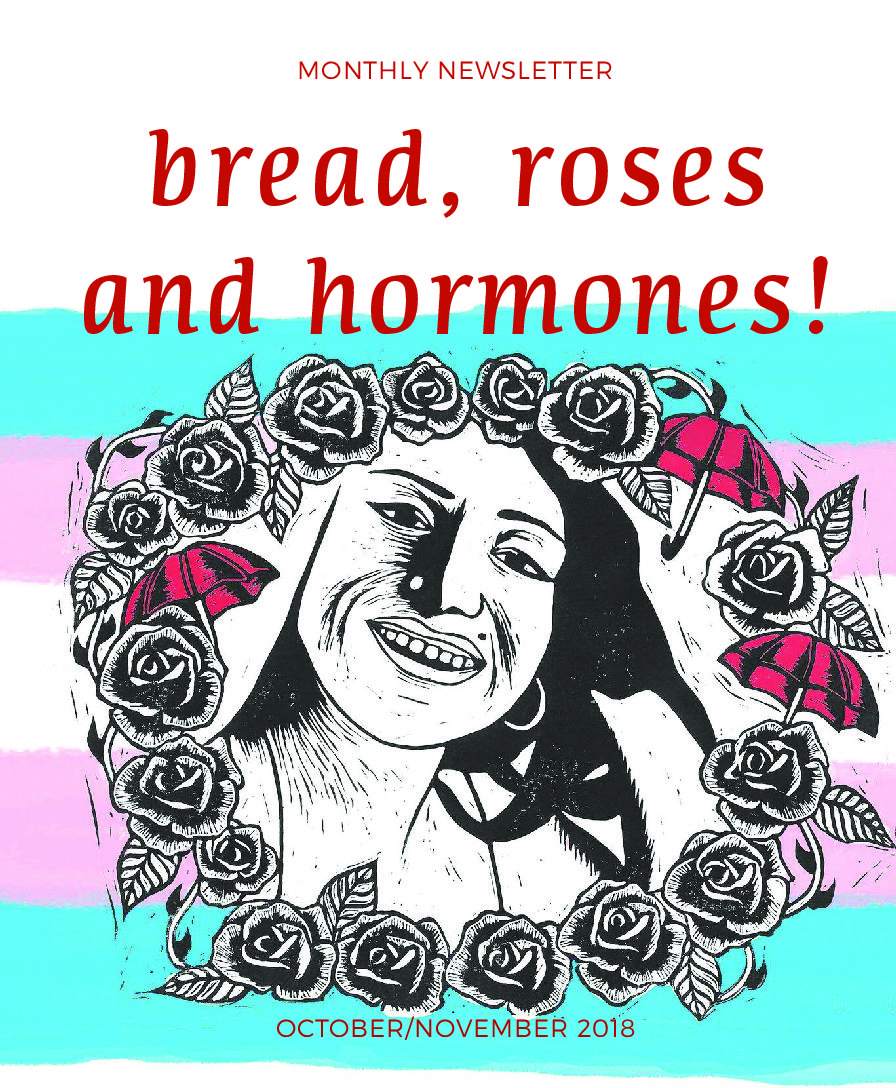 This is an abridged article. The full length article can be found here.

On August 16th, 2018 Vanesa Campos was murdered by five men. Vanesa was a migrant trans women from Peru and a sex worker, working in Paris. In response to her violent death an international day of action was called on September 21st, 2018 to bring Vanesa’s story to the public and demand justice in front of French officials around the world. In Vancouver, a vigil was organized by STRASS (French union of sex workers) organizer Christine Pompadour. In attendance were organizers from Triple-XXX, SWAN, Pace Society, Coalition against Trans Antagonism and Alliance Against Displacement.

Enacted in 2016, the French client law forced Vanesa Campos and her co-workers to work in hiding, leaving them more vulnerable to violence from police and potential clients. We rallied outside the French consulate before delivering a letter of demands to the french consul general, Guillaume Roy. We demanded the decriminalization of sex work and the creation of safe sanctuaries for migrants, trans women and sex workers. We demanded the right for sex workers to work together to build work spaces and to unionize.

Annie, an organizer with Triple-XXX shared “We are protesting today because the client law is criminalizing clients and forcing sex workers to go work in the forest where they are vulnerable and getting murdered.

Vanesa Campos was shot to death by five men in the Bois de Boulogne and we think that is absolutely disgusting, that migrant sex workers and all sex workers do not have a safe space to work. We are human beings, we are supporting our families and we are sick of all this bullshit.”

“It has been two years since the law was passed, that people come to attack and steal the girls, forcing them to work without condoms,” Christine Pompadour stated to the consul. “The girls don’t feel safe going to the police, and it is getting worse.” Pompadour added that police are “arresting our clients, not our murderers.”

THE FRENCH GOVERNMENT FINDS AN ALLY IN CANADA, WE DO NOT

Since Vanesa’s death, another one of her co-worker have already been attacked in the Bois de Boulogne, in similar circumstances. The reality for migrant women, working class trans women, and sex workers in Canada is the same. Canadian laws regarding sex work also criminalize demand. Sex workers, although not criminalized directly as ‘solicitors,’ are regularly arrested on ‘drug trafficking’ offenses -usually meaning they were in possession of a personal supply- or fined for failure to present identification. It is illegal for sex workers to text each other about safe work practices, share a driver or client, or work out of the same space.

The deaths of sex workers, migrant women, and trans women are on the hands of the Canadian and French States. As Vanesa Campos joins the long list of women sex workers murdered, we fight to bring her justice. To repeal the law by decriminalizing sex work is only a first step. We need to attack the systems creating and feeding off of poverty who limit women’s economic options to survive; To destroy the imperialist laws and racist capitalist borders that leave people with no solutions other than to migrate away from war and economic destabilization to support themselves and their families; To abolish the police who only function to repress the poor and racialized. This resistance needs the unity of sex workers, migrant women, and trans women. Together we can build a revolutionary reproductive labor movement and find our emancipation in the ruins of capitalism and imperialism.

DOIKAYT AND THE DANGER OF QUEER SEPARATISM
SASHA MANNEQUIN

In response to societal hatred, misunderstanding and violence, queer and trans people have often retreated from the straight world. What started as a search for safety quickly becomes a political goal, consciously or unconsciously carrying on the vision of 1970s lesbian separatism. Queer/trans communal houses, land projects and political groups become seen as political victories, rather than self-defense at best and escapism at worst. The promise of safety in queer scenes is not guaranteed. Trans women often get chewed and spit out of queer circles by people with more access to social and economic power; to secure safety within queer separatist struggles trans women are forced to assimilate to the desires and expectations of other queers. Queer separatism – like all separatist movements – distracts us from the anti-imperialist, anti-colonial, anti-capitalist struggle that is the only real path to liberation. Queer/trans leftists run the risk of being co-opted by a vision of a queer world separate from our straight and cis working class and Indigenous comrades.

JEWISH CLASS STRUGGLE AND THE FOUNDATIONAL FIGHT AGAINST ZIONISM

In the early 1900s, the Jews of Eastern Europe faced a similar, but far more dire, problem. Jews had been pushed into Shtetlekh (impoverished Jewish only villages) or oppressed and paying heavy fines for being Jewish in cities. Wave after wave of pogroms – massacres of Jewish people, ordered or condoned by the local authorities – spread throughout Eastern Europe. There were only two options: stay and fight, or flee. The proto-Zionist movement gained a huge following in these times, saying Jews needed their own nation state because they’d never find safety among non-Jews.

The stay-and-fight option was represented by the Jewish Labour Bund, a secular, revolutionary socialist group. To counter Zionism, they introduced the concept of Doikayt, a Yiddish word literally meaning “hereness.” Doikayt meant being linked to the issues of where you live: building alliances between Jews and non-Jews as well as participating in general working class struggle. While its main goal was always working class revolution, it also held firm in its support of secular Jewish language and culture as something worth preserving, and advocated for self determination within the nations they lived in. Doikayt proved to be a massively popular idea. It swayed many leftists Jews away from Zionism and pulled many previously apolitical Jews into socialist struggle.

A century later, Zionism haunts the world. What started out as a naive idea of political separation, mostly put forward by leftists, is in its current practice a genocidal occupation of Palestine. The Israeli occupation is a colonial death machine that knowingly exploits intergenerational Holocaust trauma to continue displacing and killing Palestinians. There are similar tendencies in queer separatism. For example, queer back-to-the-land projects by settlers ignore the continued displacement of Indigenous people by maintaining and celebrating access to capitalist and colonial property relations -albeit as a marginalized group. Just like Zionism it accepts the disposition of other people as the price of safety.

THE TIME FOR A QUEER ‘BACK-TO-DOIKAYT’ PROJECT

If we as queer and trans people reject separatism in all its forms, and embrace a Doikayt inspired
politics, what would that mean? To me, it means getting out of our identity bubbles and organizing with other working class and Indigenous people who are on the front lines fighting against exploitation and dispossession. The housing justice movement, Indigenous land reclamation movements, prison and police abolitionism, and sex worker solidarity are all great places for queer and trans people to connect with the struggles that are based in the places we live. What Doikayt does NOT mean however, is subsuming queer and trans struggle into a “united” left that undermines our needs.

Colonialism is a process not an identity: A review of Asad Haider’s Mistaken Identity: Race and Class in the Age of Trump