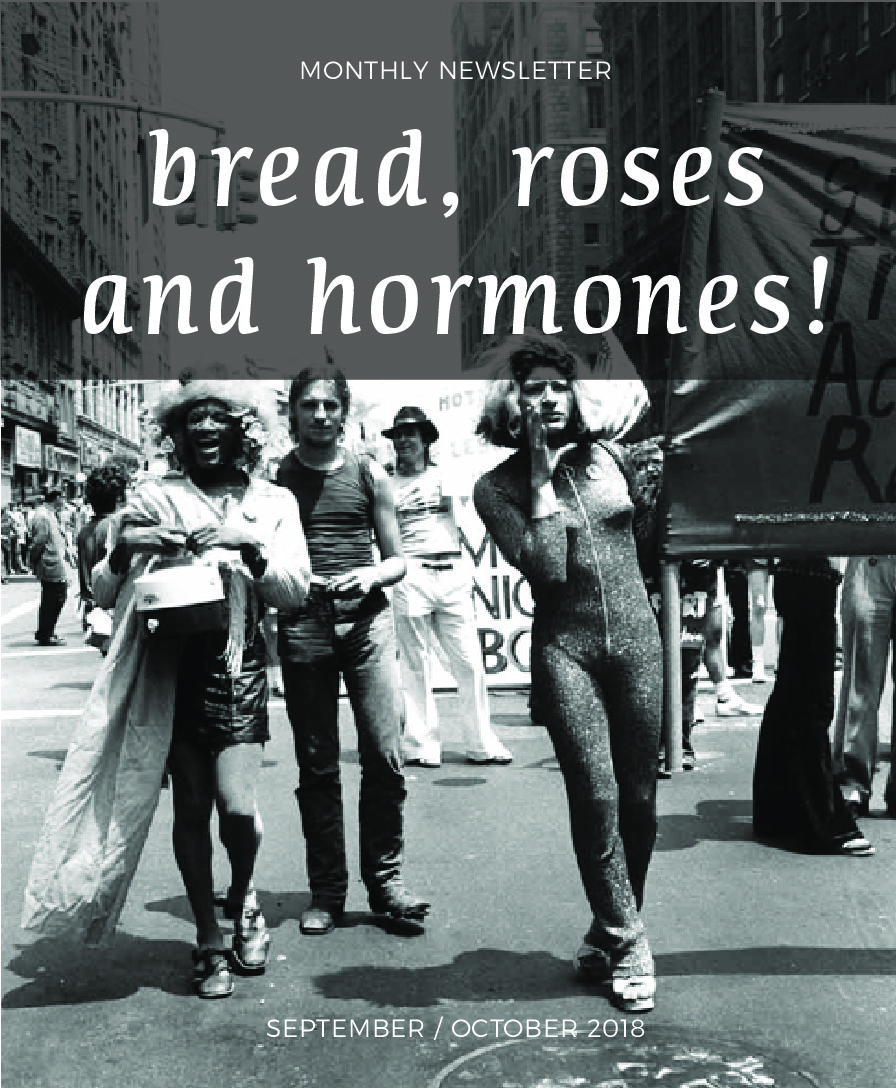 This is an abridged version of a longer article. Read the full article here.

On Sunday August 5th, 2018 the 40th annual Vancouver Pride march took place. At the same time, the fascist organization Soldiers of Odin and an ad hoc hate group called Action Against Discontent City marched on the nearly 3-month old tent city in Nanaimo. Pride aligns itself with the Prime Minister, business owners, and the pigs who protect both. The anti-capitalist and anti-colonial organizers who protected Discontent City do not.

Pride acts as a way for cis gendered queers to celebrate their increased access to housing, employment, doctors and psychiatrists, owning property and businesses. Trans women’s lack of access to regular income causes us to lose or be unable to attain secure housing. On top of this, waiting lists in B.C.for hormones or trans-friendly doctors can be months to years long, and virtually no social services exist for trans women. Pride politics fail to address the structural problems trans women face – 370 trans people were killed by bigots and police worldwide in 2017.

The Nazi regime carried out the largest purge of queer and gender-variant people in history, in an attempt to reverse the victories that they had won through the German Homosexual Emancipation Movement. Fascism’s white supremacy includes rigid gender roles that they call traditional, where men serve their country as tools for the mother nation’s imperialist war machine and women are servants that reproduce the capability for men to become obedient death dealers. We are seeing a return of this ideology in current anti-homeless hate groups that particularly target women and queer people who take on political roles in the public realm of society. Trans women who take on political roles in the public are at increased risk because we experience violence as women and as trans people.

Queer and trans activists too often have a puritanical relationship to liberation struggle, waiting around for working class people to be as educated as us on our particular issues. It is utopian to expect people outside of queer spaces to have familiarity with trans struggle and it is naive to think trans women experience less violence within queer communities.

The coalition of people who came to protect Discontent City was a remarkable aspect of the action. Feminists, unionists, young anti-capitalist radicals, Indigenous land defenders, and a strong and noticeable contingent of queer and trans youth showed up to defend the tent city. Although the counter-rally did not win immediate solutions to the housing crisis, there was a larger political victory. Queer and trans people stood alongside Indigenous warriors and the homeless activists who shared the same political goal – smashing anti-homeless, fascist hate.

Anti-poverty organizing should be seen as a location for political intervention and support for trans people because most of us are poor and working class. The Nanaimo rally in defence of Discontent City was experienced by some straight and cis homeless residents of Discontent City as proof that unity with trans and queer activists can make both groups stronger. Homeless people who are unfamiliar with trans politics and trans people who have not experienced homelessness saw each others struggle overlap, yet respected each others differences. It is in these moments that solidarity is forged.

“Trans inclusive” women’s shelters posture as a spaces free of gender violence. However, often times these spaces operate on a false narrative that gender violence against cis women enacted by cis men is absolutely intolerable while gender violence enacted by cis women on to trans women is merely an annoyance or a conflict of “opinions.” Whether this narrative is the intentional policy of the organization or the informal culture of the space, if it is operative, trans women are not safe from abuse.

When I spent time in women’s shelters only sometimes would the staff would take my side. This was usually when the remarks were so obscene the staff could no longer pretend nothing was happening. A trans misogynist narrative was presented where I am a man and I got a woman kicked out on the street for “defending a space for real women.” It was irrelevant how unsafe a certain woman in the space made me feel, I was assumed to always be wrong for being in the space with a penis. It never mattered if I was afraid for my safety, the staff would side with the assumption that I can deal with abuse because it is safer for me as a man.

I remember being told by staff that examples of transphobic verbal abuse were a chance to “educate” bigots within the space on my own behalf, despite it being part of their job to combat trans misogyny and other forms of discrimination within the space. It is hard to imagine a women’s shelter employee telling a cis women it was her duty to educate the people enacting violence against her. Although, women’s shelters promise us a space free from gender violence and thus something more friendly or pleasant than the often violent low barrier shelters their policy and the culture in reality downplays our experiences, rendering us silent. These examples of verbal abuse remind out trans women they are not accepted as women and closed trans women to “stay men or else.” It is not a matter of yelling, screaming or hitting which makes the expression of transphobic “opinions” violent as they are by default a tool used by cis people in hopes of creating a world with no trans people.

When the claim is made in a woman’s shelter that trans women are not real women the conversation stops being about whether or not women’s spaces are more safe for a homeless trans woman to be in. The conversation then becomes derailed and replaced with rants about biological essentialism, gender reassignment surgery and other irrelevant nonsense that is only brought up to deflect from the fact that women are harming women.

Trans women are displaced from the shelter system because cis femininity is read as natural and trans femininity is read as a lie. This dichotomy is harmful for feminist struggle because it does not acknowledge that ideals of femininity are ideological forces that chain women, trans and cis, to the realm of undervalued reproductive labor. Until women’s shelters can agree with the progressive elements of feminist struggle that womanhood is not defined by reproductive organs but by one’s social role in the capitalist gendered division of productive and reproductive labor, trans women will not be safe within their walls and the feminist movement will be divided.