Under an unjust state, break unjust laws – A call to revisit our strategies and take different actions: By the Editors 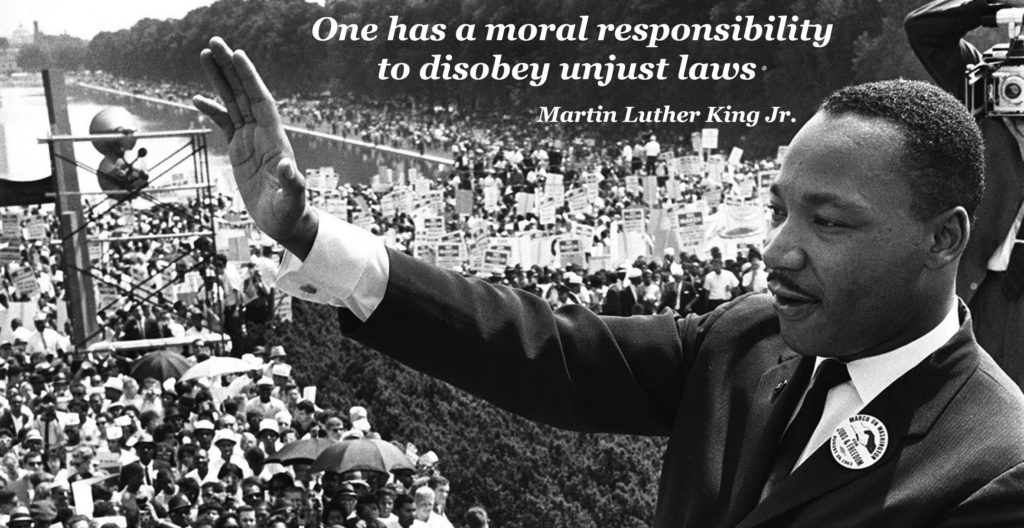 Our protests for social justice usually shout out in one of two directions: we shout against the laws that police use against homeless people in tent cities and resource corporations use to extract oil from sovereign Indigenous lands, or we shout for the state to look after our people with higher welfare rates or more social housing. But this is starting to feel like a remarkably 20th Century sort of approach that might not make sense in a world with record high homelessness, governments that are not building homes no matter what we say, cities that are gentrifiying and evicting working class residents regardless of arguments against their actions, and courts that are backing pipeline companies to plow over Indigenous lands and sovereignty.

A gulf has opened between the state and its laws and the people and our interests. This gap demands a new analysis of the relationship between our communities and governments, courts, police, and social workers (which we’ll call “the state”), as well as different strategies and actions to correspond to this new analysis.

The state’s monopoly on violence

Among social theorists, there is an unresolved debate about what “the state” means. Max Weber wrote the basic definition of the state as a social group that holds the monopoly over the legitimate use of violence. The stronger a state, the more it monopolizes the use of violence – by its agents in the police and military, jail guards and courts and prisons. Because it is so powerful, the less it must use naked violence. The weaker a state, the more its monopoly over violence is contested. For example, when the US invaded Iraq in 2003 they collapsed Saddam Hussein’s state and ever since, Iraq has since been characterized by constant war where competing groups use violence in an ongoing contest for power.

This Iraqi example points to a problem with simply seeing the state as nothing more than holding a monopoly on legitimate violence. Saddam’s state was, after all, toppled by a greater power – the US army. Why was the militarily powerful US occupying army unable to put down challenges to the rule of its installed government? The answer is that the power of the state also depends on ideas – specifically on its ability to represent the identity of the nation – at its lowest common denominator. Although Saddam’s regime was repulsive to many Iraqis, the US-installed government was totally foreign; it could not capture the allegiance of the people.

Laws are rule of the powerful

Historian Jeffrey Weeks says that laws are written in “the political moment” when the cloud of vague feelings and ideas floating around in society are “crystallized” into clear, enforceable rules. Laws are enforced by gun-wielding police and every time we feel the existence of a law, the threat of violence looms darkly. But the more belonging someone feels in a society, the less they feel the existence of laws. So, for example, property-owning families in Strathcona reacted against the government’s plan to open nearby health care services for low-income drug users by demanding their own local community policing centre. In the public debate that followed, the basic disagreement was the different relationships to police and laws that the different groups felt.

The low-income drug users felt that police and the law were threats to their communities, ways of life, and prospects for survival during an opioid overdose crisis. The homeowning families felt the opposite. They felt that the government’s proposal to increase health services lessened the power of laws and police in the lives of low-income drug users. The homeowners felt that police and the law were identical with their individual interests, that more cops on the street will increase their safety and security. Laws are representations of the feelings, will, and ideas of some groups in society, and representations of repressive force for others.

The moment you have a feeling that a law is unjust is the moment you break with the total rule of the government and powerful classes. The violent operation of that law snaps suddenly into view. When, in December 2016, Mayor Robertson sent police to dismantle the tent city protest camp at Thornton Park and arrested 7 resisters, we heard from a number of people that they were shocked, that the bylaw the police were enforcing seemed unjust. When residents facing demoviction lined up at Burnaby City Council to ask for their help against demoviction and were met by silent, callous indifference, their faces read dismay at injustice. When President Donald Trump issued an executive order barring the passage of passport carriers from 7 countries across US borders, some border guards anonymously reported, “We’re turning a blind eye—we’re pretending we haven’t seen the Syrian passport.” They felt that the law was unjust and they were refusing to enforce it.

In terms of mobilizing resistance, the feeling that a law is unjust is more important than a rational argument or analysis. It is hard to manufacture that feeling among large groups of people, but it would be a mistake to not see that this feeling has been spreading over the last couple years.

From protest to building power

In homeless camps and buildings facing eviction, the most common first response to protest organizing efforts is “why bother? There’s nothing we can do.” For more than 30 years our people have felt pushed back. During what scholars call the “long neoliberal moment,” working class and Indigenous communities have lost a lot, and we have not won many battles.

An overwhelming sense of despair has been a mass psychological effect of government austerity reforms that have cut welfare rates, eliminated social housing programs, and increased policing. It is easy to interpret this despair as political disillusionment or apathy. But apathy is not exactly what people are expressing – more often they are saying they don’t believe they can trust the system because they feel that politicians don’t care about them. As more and more of us are driven into poverty and homelessness, and more and more of us feel run over by government pipeline approval processes, more and more of us are feeling shut out from membership in the Canadian state. We are feeling that for social groups at the periphery of the gentrified city, in low-income and racialized neighbourhoods, on reserves and in suburbs and rural towns, disillusionment with the state and civil society is reaching a critical mass.

Disillusionment with protest does not mean the end of our fight for our lives. Disillusionment with protest means that the Alinskyist strategy of mobilizing affected communities to appeal to the powers that be for reforms has reached the end of its relevance. To organize those communities that feel shut out from Canadian civil society, the challenge is whether our community leaders have the vision to develop power to parallel the Canadian state – not only to protest (demand what we need from the state) but to build the power to care for each other and take the material things we need (squatting apartments, growing and harvesting food, providing care for children and elders, organizing defense forces to guard our people against bigot vigilante violence and police eviction and displacement).

We are not suggesting that we stop demanding resources from the state; only the state has the power to take money from the rich, through taxation, and redistribute wealth downwards. We are suggesting that we take a different strategic approach to getting what we need from the state. By combining survival needs with resistance, Super InTent City in Victoria was able to win housing from the BC Liberals where protest could not. That struggle shows that our being ungovernable – if we do so collectively, loudly, disruptively – will have the effect of pressing the state to increase the supports more of us need while we develop our ability to govern ourselves, including developing administrative skills like managing our own housing so we can overcome the social workers that the state sends to benevolently regulate our lives.

In this issue we look at some ways that our communities break laws to survive. Some of these ways are individual or small-group and more about illicit incomes and immediate survival than group politics. And others are prospects for collective, political survival – breaking unjust laws as part of breaking from a culture of subordinate appeals to those at the helm of the state. Our vision is to build our independent working-class and Indigenous power against the capitalist and colonial Canadian state. Soon we won’t ask for anything because we will take what we need, what we want, and what we deserve from the crooks and parasites who rob us.