From serving workers to serving the NDP – Electoral pragmatism and the end of a fightin’ democratic unionism: An interview with BCTF activist Tina Anderson by Ivan Drury

There is a famous expression that Margaret Thatcher’s most lasting legacy in British politics is her impact on the Labour Party. The same is true of the BC Liberals and the BC NDP. The rightward trajectory of the NDP since the 1980s has been accelerated and made normal by the long 16 years of BC Liberal rule. But the NDP is not an island. As Tina Anderson explains in this interview, it’s leadership is “incestuously” intertwined with the leadership of the labour movement – so the NDP is not drifting rightward alone. Tina Anderson is a long-time trade unionist from a progressive trade unionist family. We spoke together during the lead-up to the 2017 BC election. The interview was long and covered a whole spectrum of BC and labour movement politics; we have chosen two stories she told – one about “the fightin’est little union” Fisher strike in 1967, and the other about the betrayal of the BCTF-led fight against the BC Liberal government in 2005. 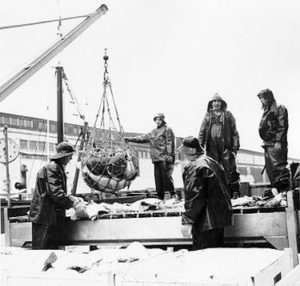 Union democracy and militancy in the 1967 Fisherman’s Union strike

Tina: Do you know who Homer Stevens was? He was like my uncle, he was one of my dad’s best friends. He was the Business Agent of the BC Fisherman’s Union. It was smaller union, but it was the fightin’est little union in the BC Federation of Labour, full of dedicated trade unionists, and it led the labour movement.

In the Maritime Labour Centre, at the front of the hall, there’s a carved eagle with feathers – this is the story of where that eagle came from.

Back in 1967 there was a big shore worker’s strike up in Prince Rupert. It was salmon season. Anyway the shore workers went on strike and they were out in Prince Rupert and the Rupert fleet was coming back in and those boats were loaded with fish. It was a negotiating year, they were in the middle of negotiations, and they had a perfect bargaining chip with these boats coming in, needing to be unloaded. Shoreworkers refused to unload the boats. The fishing companies up in Rupert went to court and got a court order, and the fisherman’s union leadership – Steve Stavness was President and Homer was Business Agent – were ordered to tell their members to unload those boats. Steve and Homer said: no we can’t do that. We don’t dictate what happens to our members, our members tell us what to do. And so those boats were not unloaded.

They took a secret poll about whether to follow the court order, and the shore worker membership, almost in its totality, said no, we’re in the best possible situation to bargain for the collective agreement we need and deserve. They said no we’re not going to unload the boats. Sadly that fish all rotted because the fishing company wouldn’t move. That fish all had to go out into the middle of the ocean and be dumped. They jailed Homer and Steve.

Homer and Steve got between 9 months and a year out at Matsqui Penitentiary, which was 80 percent First Nations people. While they were in jail they made wonderful friends with those inmates, did some education, did some organizing, talked with them about workers issues, about building a better world. Steve and Homer organized for the herring fleet here in the Lower Mainland to go out and do a voluntary herring fishery. They got to know many members of the Sto:lo Nation who were in Matsqui with them; some of their friends were in there for stealing a loaf of bread. They told them of the plight of the Sto:lo people, the poverty in their band, and the fact that the Ministry of Fisheries and Oceans were really cutting back on food fish for First Nations fishers. They organized a voluntary fishery and brought back boats and boats loaded with fish to feed the family members of the Sto:lo Nation who they were in Matsqui penitentiary with. As a thank you for the solidarity and friendship that Steve and Homer showed as leaders of the Fisherman’s Union, First Nations carvers of the Sto:lo Nation carved that eagle as a gift to the Fisherman’s Union.

Ivan: In that story we see union democracy grounded in the membership, a leadership that acts in service of that membership with its politics directed by the immediate material needs of that section of the working class. We also see a broader sense of solidarity that reaches beyond the workplace and beyond capitalist relations into these colonial problems too.

Tina: The union did its work, it wasn’t dictated to by the needs of the NDP. The reason that the leadership in the BC Federation of Labour would never fight like that today, the reason they would never allow a general strike is because they can’t control it. They want to control the direction and the outcome of any labour action in favour of the NDP. I don’t think any major labour action is ever held today without the NDP’s consent.

Tina: I was very proud to be a teacher in 2005. We went on an illegal walkout where we could have been fined, we could have been sanctioned in our employment, we could have lost a lot more wages than we did. The BCTF strike lit this lantern that caught on and many unions came on board to support. Christy Clark was still Minister of Education at the time. The BC Liberal government was coming down hard on a lot of unions, just like Christy was on teachers.

A huge amount of pressure was put on BCTF president Jinny Sims to end it. We ended that strike at the height of our strength. We were the strongest we possibly could have been at the end of that two weeks. All of a sudden – poof. We got too close to a general strike, where so many unions were getting close to joining our ranks. It was a snowball effect, many unions had gone out for us – one day here and one day there – when the BC Fed put a huge amount of pressure on the BCTF executive. That strike was starting to grow into other mobilizations when it was killed by the BC Federation of Labour because they were afraid of where it was going to go.

I think that the BC Fed were very afraid that if so many unions came on in support of the BCTF and teachers that there was a possibility it could lead to a general strike. It was the closest we came to a general strike since Solidarity in 1983. General strikes are wildcat-ish, they take on a life of their own. They were worried that if we didn’t settle, that could give a lot of encouragement, a brighter flame, to a lot of unions that were also being adversely affected by the BC Liberal government at the time. That could get out of control quite quickly in their eyes. I thought that would be a wonderful thing because that’s how revolutions are made, that’s how fightbacks are started, that’s where workers have always gained their strength and had some victories, but union leaders today don’t want to see that happen because they don’t want to lose control.

The big argument is that if workers start to make gains all by themselves, they won’t need a workers’ party to be elected, and the NDP becomes less relevant. If you’re making gains on your own at the bargaining table, through strikes and political action and you’re doing it with other unions then you don’t need a saviour.

Ivan: It would invert the power dynamics between the two groups because the workers would be exercising power and would direct what that party would do. Beneath the paternalistic culture of the NDP and union leadership is a distrust of actual working class people.

Ivan: I wanted to talk with you about unions and the NDP because I feel like unions have become disconnected from fights against the BC Liberals. I mostly organize with working class people who are not union members – either low wage workers, people who are unemployed and on welfare and disability, or people who are homeless and have no incomes at all. The labour movement has ceased to mean anything to any of those people.

Tina: The labour movement isn’t fighting for those people anymore. The main focus of the labour movement is to get the NDP elected. The damage that this government has done is not quantifiable. This government has so much blood on its hands. From a teacher’s perspective, there’s a whole generation of students who struggled through school and got lost because of this government. But more and more I find the unions are being silent on the things that matter. It wasn’t always like that.