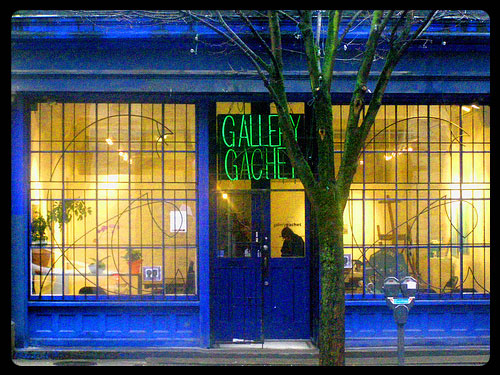 At Gallery Gachet until May 7

In the earnest and thought provoking exhibition “How to Remember,” local artists Mercedes Eng, Taryn Goodwin, Sima Elizabeth Sherin, Sonrisa, and an anonymous artist humanize an array of arduous issues related to health, labour, human connection, and gentrification. Collectively, the artists contemplate various pursuits of self-care and acceptance in the realm of physical and mental health, and bring to light what’s at stake for the surrounding neighbourhood in the face of ongoing gentrification.

The exhibition, curated by Gallery Gachet’s programming coordinator Kristin Lantz, comprises a range of creative visual documentation including journaling, knitting, illustration, poetry, and embroidery — personalized forms of record-keeping that reveal vulnerable histories as the artists make sense of their own lived experiences.

Taryn Goodwin’s Life, Supports maps out a year-long journey of health care appointments, support, and recovery. More than 100 illustrations, each matched with a corresponding receipt, make a strong case for health and self-care to be valued as work in an age when so many are excessively fixated on economic productivity.

At the front of the gallery sits a humble rocking chair, thoughtfully draped with a hand-knit quilt embellished with colourful geometric shapes — gently crafted details that were first imagined from the psychiatric ward of St. Paul’s hospital. Prescription pill bottles nested under snug wool coverings, encircling a single healing stone from Haida Gwaii, suggest that when comfort is nowhere to be found, it may perhaps be something we can create.

As an uplifting ode to humour and companionship in times of fear and uncertainty, Sima Elizabeth Shefrin’s The Embroidered Cancer Comic navigates difficult conversations about diagnosis and treatment.

With Prodromal, Acute, Medicated, an anonymous author invites readers on a meticulously chronicled journey into the mind of a young adult experiencing psychosis. The manuscript’s pages, protruding from the surrounding walls, are a reminder of how impossible it can feel at times to escape one’s own thoughts, compelling readers to face truths of their own.

Along the back wall of the gallery, Mercedes Eng’s our downtown eastside sampler is suspended from the ceiling in a looming fashion, commanding the attention of even those who peer into the window from outside on East Cordova street. Inspired in part by the work of Karenza T. Wall and fellow community organizers, Eng’s sampler acts as a ledger of sorts — for every ambiguous phrase used by developers to obscure changes to the neighbourhood, its corresponding “truth” is to be stitched from the community’s perspective.

For two decades, Eng lived in the Downtown Eastside, just down the street from Gallery Gachet. Her experiences as a former drug user and sex worker, and later as a student who eventually became a teacher, inform her poetry work and provide critical insight into the concerted efforts to push low-income folks out of her neighbourhood.

With “accumulation” listed as the first order of business, alluding to the accumulation of land as private property under capitalism, this work clearly considers the historical context of the city’s housing situation both locally and globally, calling to question a society that is consumed by the pursuit of material possessions and capital.

Despite losing its core funding through BC Liberal cuts to the Provincial Ministry of Health in 2015, Lantz noted that Gachet remains an open space for artists to thoughtfully and creatively address issues surrounding mental health, social justice, and marginalization.

“It requires a deconstruction of what we think healing and wellness is. It asks us to think about what we’re constructing our belief and value systems around,” Lantz said, maintaining that the exhibit was not about achieving some “perfect” idea of health, but rather encouraging respectful relationships of mutual support to grow from the connections people create with each other.

When it comes to addressing mental health concerns, inadequate government action leaves much to be desired for mental health consumers, and the presence of a space like Gallery Gachet is integral to the neighbourhood.

“Sometimes I feel very cynical about how the Downtown Eastside has changed… In some ways, I feel like [the battle] is over and certain people have won, and not the right people,” Eng admitted, as she thought about the ongoing displacement of low-income residents. However, with this exhibition, she has laid out what’s at stake for the neighbourhood in the face of development applications and depleted affordable housing. “It seems important to remember the neighbourhood, even as it’s changing, and to record how it happened.”

Find out more about Gallery Gachet, including accessibility information, at www.gachet.org.

Just Imagine! Rest, music, and the richness of life in the Downtown Eastside community