“There’s definitely an anti-Indigenous energy in the police here”

Wednesday, April 11th, 2018 — This morning three Indigenous defenders of the land appeared in court for the first time. They have been taking action to prevent TransMountain pipeline construction around the Tsleil-Waututh Watch House and Camp Cloud near Kinder Morgan’s tank farm on Burnaby Mountain.

Crystal Smith went up to Burnaby Mountain with her mother and two children. They blocked a work truck with others. “I was standing on the side when two police officers approached me. I asserted my inherent rights as a Tsimshian and Haisla woman,” she explained after getting out of jail. “Within seconds I heard my mother, who was being physically harmed by the police, and my son who had just left my arms. I struggled as I watched my kids who were scared and I tried to get to them, but the police forced me into a stretcher. What was clear to me that day was how the police were so much more violent in their treatment of Indigenous bodies.”

Tia Chicome is a Xiximec Mexika woman who was raised in a Siletz community in so-called Oregon. She most recently lived on the Yakama reservation before coming to this territory with her twelve-year old daughter to join the fight against Kinder Morgan. She is now under threat of deportation after having been arrested by the RCMP on criminal charges around an incident in the early hours of March 21st. A truck driver endangered the lives of several land defenders, when he aggressively drove a truck into them outside the gate to the tank farm construction site. In the words of the fundraising page, “Free Tia Chicome,” set up to raise money for her legal fees, she “heroically intervened.” The RCMP initially claimed they would look into the actions of the driver, but instead returned to violently arrest Chicome, taking her by surprise and bringing her to the ground. 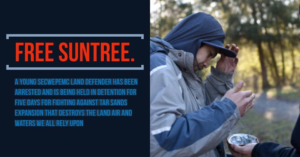 Suntree Johnson Larue travelled from his home territory to stand with Coast Salish peoples against Kinder Morgan. Over half the length of the projected TransMountain pipeline lays across his Secwepemc territory in the interior. He was arrested over an action on the night of March 19th in which land defenders blocked a truck at the worksite for several hours. He was upset at witnessing police being rough and disrespectful with elders in the process of detaining them.  The RCMP and Crown held him for six days over the Easter weekend.

I asked Chicome and Johnson Larue why certain individuals have been subjected to more brutal arrests and criminal charges while others, such as Green Party MP Elizabeth May, who engaged in “civil disobedience,” have been treated carefully and respectfully, and given civil charges onsite without being taken into custody.

“They’re worried about me because I’m Native, I’m First People. My territory never signed a treaty ever. We’re Shuswap nation, Secwepemc’ulecw,” Johnson Larue told me. “We’re warriors inside, we’re trying to let you guys be a part of our land but they’re destroying it now with this industrial age.”

“I’m letting Creator guide me, ancestors are guiding me,” he said. “I don’t like the way they’re treating my brothers sisters around me. I have respect for all living forms, it’s their ideologies I don’t agree with, their fake jurisdiction. They don’t understand they don’t even have permission to be here but they get away with it because of their massive armory, and we have what? We’re not allowed to defend our land.”

“There’s a big difference between the way they’re arresting us and the way they’re arresting everyone else,” added Chicome. “When I was arrested I saw people being symbolically arrested or whatever they call it, some of them weren’t even being handcuffed, just gently walked over and processed out.” She speculated that another reason for the different forms of police treatment is, “I don’t think the cops are used to people asserting their dignity. You’re not going to interfere with my human dignity, I’m sorry.”

“I’m really tired of activists singing nursery rhymes and playing kumbaya with the cops. I did that for a while until I could see that what was happening was that they were just cooperating with the police,” she said. “It’s almost like the police were organizing a protest and dictating what happens in the protest and after it. I got sick and tired of that because we’re in a climate crisis and it requires more than cooperating with the police. The police represent the enemy and white supremacy and I’m really tired of people not seeing it that way.”

She also described to me how since she stopped cooperating with police she’s been followed by the Vancouver Police while driving, pulled over and brutally arrested, locked in a bathroom for several hours and held without charge. “As soon as I got out of the car they pushed me and pushed me. They put me on the ground and cuffed me, flipped me over, slamming my face into the ground. They were calling me names and being violent towards me in front of my daughter. One of them put his hand on his gun and started going toward my daughter saying show me your hands. I screamed at him she’s only twelve years old and got up. Another officer grabbed me by my throat and threw me down,” then held her on the ground with his foot on her back, preventing her from breathing. She said the officers were congratulating each other on having “got the pipeline protesters,” and that they confiscated traditional medicine without ascertaining what it was.

She said there’s definitely an “anti-Indigenous energy in the police here… They kept insisting I was on drugs or that I was drunk. I felt a lot of hatred from them. I think VPD is more violent than Portland police, and I’ve been shot at with rubber bullets and flash grenades by Portland police but VPD, they were stopping me from breathing, and I could feel they didn’t care if I died.”

One day at Camp Cloud, Chicome was sitting on a log when two Native RCMP liaison officers came over. They tried to impress her, asking her nation. “I told them, and then I said ‘Oh, you guys are scouts.’ They laughed and said ‘No we’re not’ and I could see maybe it hurt their feelings so I told them don’t feel bad, I used to be one too. My great-great-grandfather was an Indian scout in Arizona, and I was in the U.S. military. So I told them, I used to be a scout too but then I woke up. You guys need to wake up. And they walked away.”

I asked both Chicome and Johnson Larue for their reaction to Trudeau’s invocation yesterday of Canada as “a country of the rule of law” in his insistence that TransMountain will go through.

“It’s just another colonial European decision,” was Chicome’s first response. “Our whole worldviews are just totally different. Our laws are laws of the land. To me their worldview seems like it’s not based in reality. Every time I hear ‘rule of law’ it makes me sick because in the 60s when the U.S. civil rights movement started, the people who were against civil rights would use ‘rule of law, rule of law, rule of law,’ so rule of law means to me if you rise up against white supremacy you’re going to get squashed, right? And pipelines are just another version of white supremacy.” 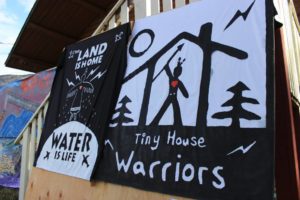 Kanahus Manuel of the Tiny House Warriors and the Secwepemc Women’s Warrior Society has stated, “This is not the first time Canada has violated our inherent Indigenous laws and jurisdiction and criminalized us for upholding our responsibilities. We survived through Potlatch Laws for over twenty years when our people faced jail for practicing our potlaches. Now we are being arrested for defending our inherent and constitutionally-protected rights to land, water, and culture.”

“We’re not protesting, we’re land defenders and we have the right to defend the land,” Johnson Larue told me. “We’re doing this for everybody here and everything living. We all depend on water, everything water is life. All my relations.”

The Volcano launches a podcast!

City of Victoria Pledges Millions More to Cops not Homes