The Volcano launches a podcast! 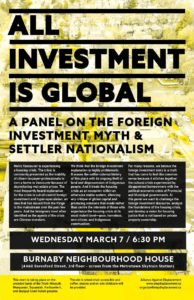 The first monthly podcast of The Volcano focuses on critiques of the foreign investment myth, which has come to dominate conversations about the housing crisis especially in the Lower Mainland, across British Columbia, and in Canada more widely. The podcast is based on talks given by listen chen, Isabel Krupp, and Ivan Drury at an Alliance Against Displacement panel called “All Investment is Global: A public panel on the foreign investment myth” held at Burnaby Neighbourhood House on March 7, 2018.

listen chen’s (陳聽春) talk was titled “Pacific Nativism and the Safeguarding of Western Liberalism.” They relate the anti-mainlander sentiment in Hong Kong to the scapegoating of Chinese people and investment in British Columbia. Read an edited and expanded version of listen’s talk here.

Isabel Krupp’s talk discussed the roots of progressive Canadian nationalism in the NDP and the labour movement, and the current B.C. NDP’s use of the foreign investment myth to cover up austerity politics and policies. Read an edited and expanded version of Isabel’s talk here.

Ivan Drury’s talk focused on “home” as a cultural and economic avatar for settler nationalism, and discussed why working class Canadians value the home, and what anti-capitalists should do when they feel denied that home.

Lead-in music: “Frenzy” by The Ex

“There’s definitely an anti-Indigenous energy in the police here”