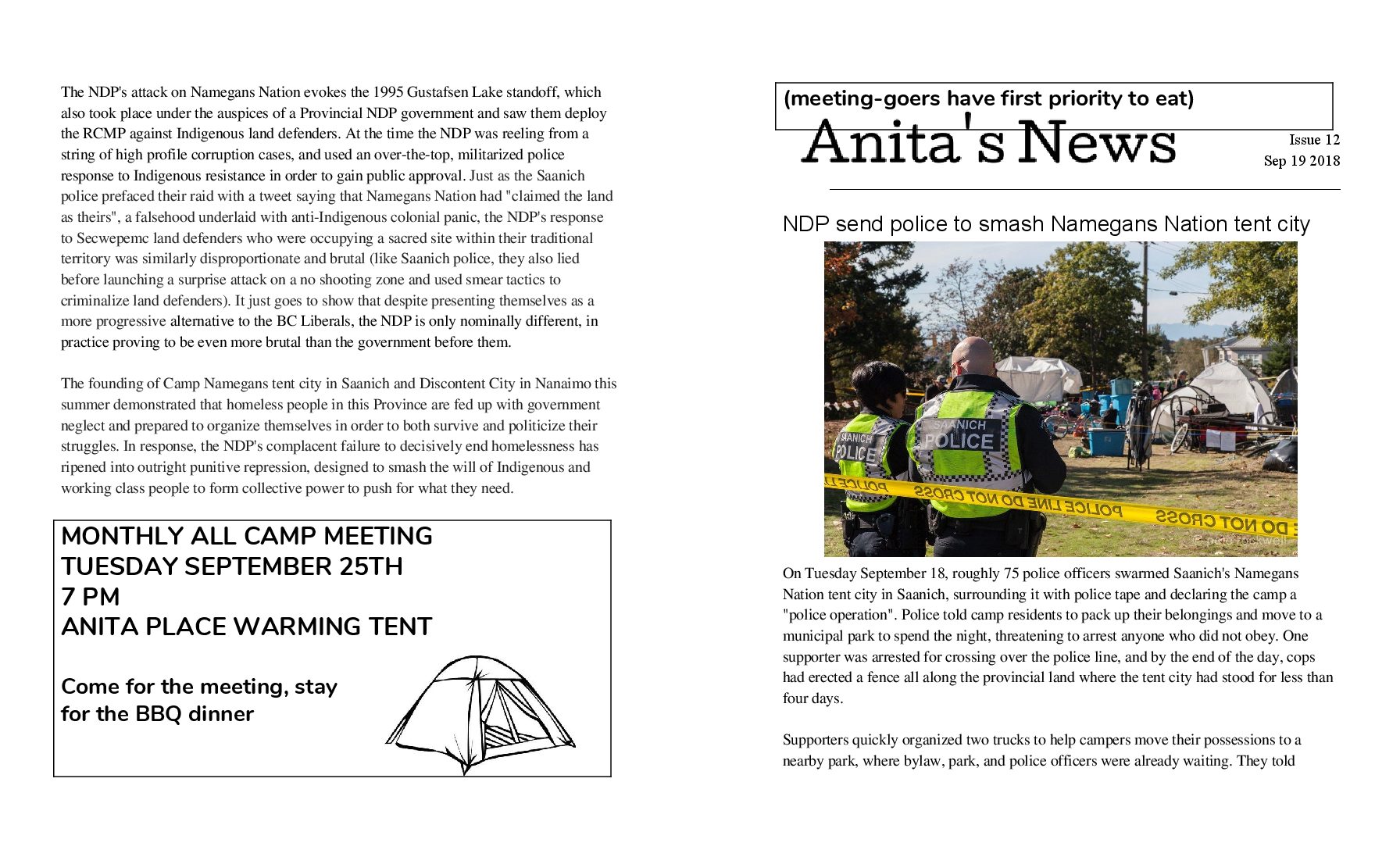 The NDP’s attack on Namegans Nation evokes the 1995 Gustafsen Lake standoff, which also took place under the auspices of a Provincial NDP government and saw them deploy

the RCMP against Indigenous land defenders. At the time the NDP was reeling from a string of high profile corruption cases, and used an over-the-top, militarized police response to Indigenous resistance in order to gain public approval. Just as the Saanich police prefaced their raid with a tweet saying that Namegans Nation had “claimed the land as theirs”, a falsehood underlaid with anti-Indigenous colonial panic, the NDP’s response to Secwepemc land defenders who were occupying a sacred site within their traditional territory was similarly disproportionate and brutal (like Saanich police, they also lied before launching a surprise attack on a no shooting zone and used smear tactics to criminalize land defenders). It just goes to show that despite presenting themselves as a more progressive alternative to the BC Liberals, the NDP is only nominally different, in practice proving to be even more brutal than the government before them.

The founding of Camp Namegans tent city in Saanich and Discontent City in Nanaimo this summer demonstrated that homeless people in this Province are fed up with government neglect and prepared to organize themselves in order to both survive and politicize their struggles. In response, the NDP’s complacent failure to decisively end homelessness has ripened into outright punitive repression, designed to smash the will of Indigenous and working class people to form collective power to push for what they need.

On Tuesday September 18, roughly 75 police officers swarmed Saanich’s Namegans Nation tent city in Saanich, surrounding it with police tape and declaring the camp a “police operation”. Police told camp residents to pack up their belongings and move to a municipal park to spend the night, threatening to arrest anyone who did not obey. One supporter was arrested for crossing over the police line, and by the end of the day, cops had erected a fence all along the provincial land where the tent city had stood for less than four days.

Supporters quickly organized two trucks to help campers move their possessions to a nearby park, where bylaw, park, and police officers were already waiting. They told residents that they would only be allowed to enter the park with a sleeping bag, a tent, and one change of clothes—all other possessions would be confiscated, ostensibly due to the District’s “chattel” bylaw, which states that unaccompanied possessions are prohibited in Saanich parks. According to the District’s interpretation of its own bylaws, homeless people are legally non-persons and have no claim to possessions—absent, even when they are physically standing with their things. Parks, bylaw, and police refused to back down from their demand that people abandon the bulk of their belongings in order to camp overnight in the park; campers and supporters had no choice but to move to a Provincial campsite.

The fascist police raid came at the request of the Ministry of Transportation and Infrastructure, a day after the Saanich police assured the camp’s lawyer that they would not take any surprise actions against the tent city and two days after the camp responded to the Ministry of Transportation and Infrastructure’s trespass notices with a claim that displacing them from the sanctuary of the site would violate their Section 7 Charter rights. Namegans Nation, formerly Camp Namegans, moved to the Provincially-owned site after losing a court injunction at a previous site, which was predominantly City-owned. The judge found that the Saanich bylaw which permits homeless people to sleep in parks night-by-night is an adequate response to the crisis of homelessness, at least from a municipality’s perspective, going so far as to state how moved he was by the District of Saanich’s “compassionate” approach to homelessness.

The court’s verdict accepts mass homelessness as a new normal that no longer suggests urgent action is needed from the government. This turn has been accompanied by a marked increase in police repression and brutality against homeless people, sending a clear message: you are not welcome in public spaces, and any attempts you make to protest your conditions will be met with punitive force. The cops are going above and beyond the already violent measures required of them—not only did they enforce the trespass order, but they also lied to the camp’s lawyer, came with a disproportionate show of police presence, and blocked campers from actually camping in a nearby park with a complete misinterpretation of the chattel bylaw. The heightened fascist tactics of the police are clearly intended to break the politicized spirit of organized Indigenous and working class people, and we have the NDP to blame.

The NDP’s war against the homeless

In deploying the police to enforce the trespass order, the BC NDP-Green government sidestepped the unresolved question of homeless people’s Charter rights on Provincially-owned property. With just the authority of a trespass claim and the request of the Ministry of Transportation, residents of Namegans Nation found themselves attacked by the police twice in one week, with literally nowhere to go to. Rather than risk going before a judge who might see the Province as responsible for homeless residents, the NDP decided to use police brutality to beat down organized Indigenous and working class people.

On Monday, September 17th, Minister of Housing Selena Robinson expressed disingenuous concern over the safety of the camp because of its proximity to a highway, implying that dismantling the tent city was for the good of its residents. At the same time, the NDP announced that a 25 bed shelter, normally reserved for extreme weather, will open in Saanich on October 1st, as if 25 cots in a room will adequately address what only social housing can fix.