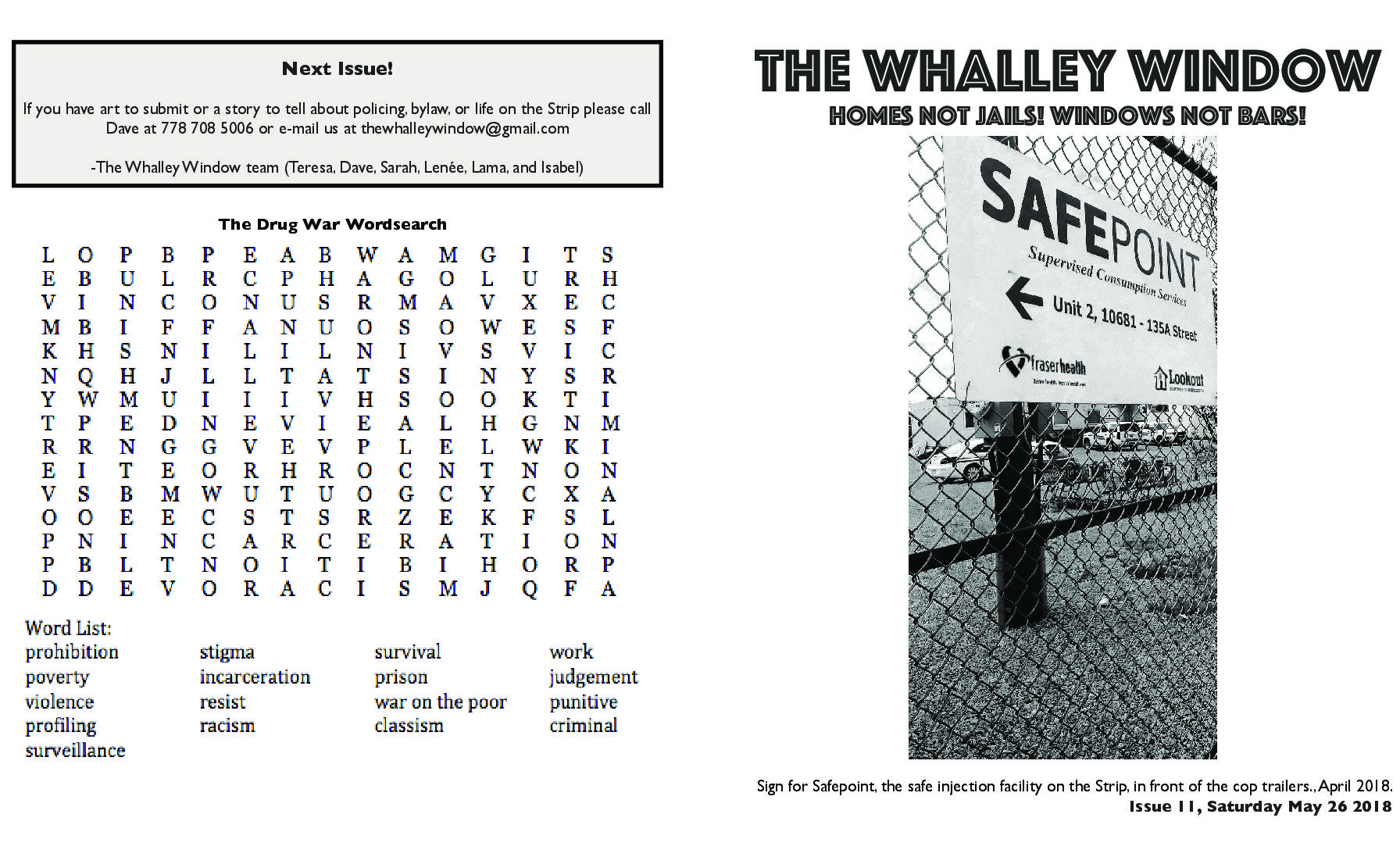 Shades of Blue: Overdose Deaths and State Power
By The Whalley Window Team

The number of drug overdose deaths shows no signs of letting up. In the most recent BC Coroner’s report, the month of March 2018 saw a shocking 58% increase in overdose deaths over the previous month, and was the second highest on record with more than 5 people dying every day on average. Surrey (55) ranked second behind Vancouver (102) in overdose deaths in the first three months of 2018, and the Fraser Health region had the highest number of deaths during the same period (121).

In April of this year the BC Coroners Service “Death Review Panel” released their recommendations. Made up of 21 doctors, cops, and government staff, this panel studied overdose deaths over a 19 month period (Jan 2016 – July 2017). They decided on three main “short term” and “practical” recommendations: better regulate treatment and recovery programs, expand addiction care, and improve safer drug use. They narrowly identified the main problem as “the recent increase in drug toxicity” since “the potency and content of illicit substances is unpredictable.”

Urgent action is necessary to stop overdose deaths, and this action must target the reason behind the uncertain potency of illegal drugs: they are produced and distributed within an organized, illegal and unregulated market. Not only are people who carry, produce, sell or use these substances criminalized and socially stigmatized, but they will always be at risk because they won’t know what’s in the drugs. Keeping drugs illegal kills people.

The recommendations of the “Death Review Panel” strengthen the decision-making power of doctors and social workers over the lives of people who use drugs. Their authoritative management and control of drug users act as a form of “soft” power. At the same time, cops, courts, and prisons continue to use tactics of “hard” power — more arrests, more convictions, and more prison time. In 2016, police across Canada made over 95,000 drug arrests; and in Surrey, total drug arrests have been rising since 2010. In 2016, the total number of drug arrests reached 2,732, with a 43% increase in heroin possession arrests and a 31% increase in heroin trafficking arrests.

Laws are weapons in the hands of the powerful. Drug laws in Canada have always been used to discipline, control and punish low-income, Indigenous and racialized people. Poor and marginalized communities are much more likely to be policed, arrested and caged, and Indigenous and Black people are overly profiled, criminalized and incarcerated. Additionally, women who use or sell drugs are more likely to end up behind bars than men. In BC provincial prisons, 11.6% of women and 7.5% of men are locked up on drug charges. Federally, almost 27% of women prisoners, mostly Indigenous and Black women, are doing time for drug-related offences, compared to 16.7% of men.

Both hard and soft power are used to surveil, contain, criminalize, and punish poor and working class people. On the Strip, the mix of hard power (police and bylaw) and soft power (medicalized management and social worker control) are clearly evident, as the RCMP “Surrey Outreach Team” headquarters sits right beside Safepoint, the Front Room and two shelters. Under drug prohibition, stigma, harm and death will continue to intensify and those who suffer these impacts will continue to be blamed and disciplined. We cannot accept the temporary solutions currently on offer. Instead, we must organize to demand radical social transformation so that poverty and homelessness are eliminated and people who use drugs can do so without fear of punishment or death.